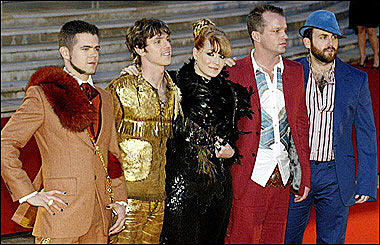 The Brit Awards happened and the Scissor Sisters won three out of four nominations.

They had this to say:

THANK YOU!!! THANK YOU!!! THANK YOU!!!
WELL, THE BRITS CAPPED OFF AN AMAZING YEAR IN THE U.K. FOR US. TO WIN 3 AWARDS - BEST INTERNATIONAL BREAKTHROUGH, BEST INTERNATIONAL ARTIST, AND BEST INTERNATIONAL ALBUM – IS THAT INSANE OR WHAT? AND ESPECIALLY WHEN THE COMPETITION INCLUDES SOME OF OUR IDOLS AND A LOT OF PEOPLE WE DEEPLY RESPECT. THERE’S NOT MUCH MORE TO SAY THAN THANKS TO EVERYONE WHO VOTED FOR US, THE SCISSORHOOD AND THE BRITISH PEOPLE. IT WAS JUST A YEAR AGO THAT WE DROPPED OUR LITTLE HOMEMADE RECORD ON YOU ALL, AND THE LOVE YOU HAVE GIVEN US HAS BEEN NOTHING LESS THAN AWE-INSPIRING. YOU COULD NEVER KNOW HOW MUCH IT MEANS TO US (THOUGH HOPEFULLY SOME OF YOU WILL GET TO KNOW THAT FEELING IN THE FUTURE). ALL OUR LOVE AND LOYALTY – ANA, BABYDADDY, DEL, JAKE AND PADDY.

Tonight is the Grammys. Good luck to the Scissor Sisters again. What to expect from the show.

The Canadian Juno award nominees were recently announced. The Arcade Fire were nominated for two.

Wednesday night was the Plug Awards at Webster Hall.

New York-based rock acts TV On The Radio and Interpol took top honors at last night’s (Feb. 9) Plug Awards in New York City. TV On The Radio won album of the year for its Touch & Go release "Desperate Youth, Bloodthirsty Babes," while Interpol was named artist of the year.

Another review here, and a few photos here.

Zutons Fever Is On, Awards Or No Awards