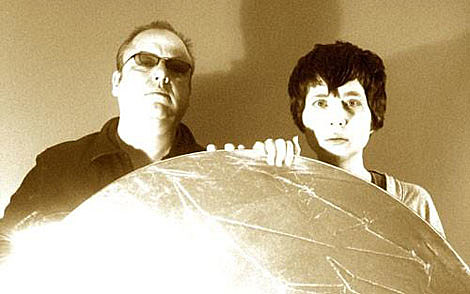 "Frank Black is an unassuming monster. In between songs at Harlow's last Monday, he affectionately listened to his wife, Grand Duchy singer/bassist Violet Clark, as she recounted unfunny anecdotes. But Black nursed his red wine, eyes peering from behind neon-lens black sunglasses, and let her jaw. Nice husband.

When Black's took his turn on the mic, he first soothed up to it, coiling his portly build like a chunky cobra about to strike. And then he did, ripping into songs with that gentle, inimitable Frank Black baritone that pretty much every 16-year-old teenage poseur wanted to hear emerge from their pubescent throat back in 1989." [Sacramento News & Review]

Frank Black's new band Grand Duchy has already played a bunch of shows - just none in the NYC-area yet. That changes in July.

Like Frightened Rabbit, Grand Duchy will be playing the Siren Festival in Coney Island on July 18th, and Maxwell's in Hoboken one day earlier. Frightened Rabbit's show is early. Frank Black's show is late. Tickets are on sale. All dates below...