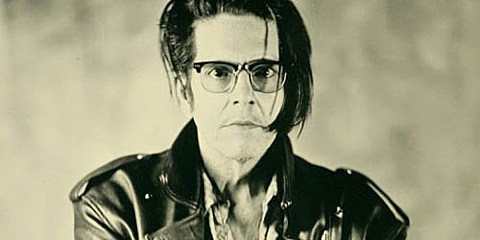 As you may know, Grant Hart of Hüsker Dü released his newest album, The Argument -- one of the most well-received albums of his post-Dü career -- earlier this year, and has been supporting it with some shows. He's currently on tour in Europe, and upon returning to the US, he'll play a few more dates here, including one in NYC on November 22 at Cake Shop (the same venue he played in September). Other acts and admission price are TBA. All dates are listed below.

While Grant will be in NYC, that same day he'll be one of the speakers at the Three Rooms Press-presented "JFK/NYC/OMG," an "examination of conspiracies on the 50th anniversary of the assassination of President Kennedy," which takes place at the Cornelia Street Cafe (29 Cornelia Street, between Bleecker and W. 4th) in the West Village at 6 PM. In addition to Grant, other speakers include X singer Exene Cervenka, PUNK Magazine co-founder and former Spin editor Legs McNeil, poet/novelist/publisher Charles Plymell, Allen Ginsberg archivist Peter Hale, and writer/actor Peter Carlaftes. Admission is $20 at the door, first come, first served. Flyer below and more info here.

In other Grant Hart news, the documentary on him, Every Everything: The Music, Life & Times of Grant Hart, directed by Gorman Bechard (who did the Replacements doc, Color Me Obsessed), will get its Midwest premiere on November 13 at Sound Unseen. It screened in NYC during the 2013 CBGB Music & Film Festival.

Speaking of Legs McNeil, he's one of the many old CBGB regulars to have written a tribute for the late Lou Reed. Legs contributed a bit to John Holstrom's interview with Lou in the first issue of PUNK Magazine, which is excellent, hilarious, and off-kilter (you can read it in the new-ish book on the magazine), and his recently-penned tribute to Lou is most of things, but also very sentimental. In a piece titled What Lou Reed Was Really Like: Legs McNeil's Tribute to the Velvet Underground Legend for The Daily Beast, Legs writes:

Over the years, people asked me, "What's Lou Reed really like?"

"An asshole," I'd tell them and see the disappointment in their faces, and wait until they were thoroughly bummed out, before adding, "But if I'd written just one of the hundreds of great fucking rock and roll songs that he has written, maybe I'd finally be a happy man. Can you imagine if you'd written 'Heroin' or 'Sweet Jane' or 'Rock & Roll' or 'New Age' or any of his songs? Jesus, the guy really is good, isn't he?"

Unfortunately, I came to learn that Lou's "grumpy old man routine," at least in his younger days, was an act. I think Lou did it to keep out the noise. I know a select few people who were truly friendly with Lou and enjoyed the charming, funny, smart version of him, when he allowed himself to be human. How tedious. I prefer my version--the ultra-bored, quick-witted, cheap, miserable, malcontent man who never experienced a moment of joy in his life. It went with his songs.

Of course, thanks to Laurie Anderson, we know this is not true. Lou actually seemed to be silly in love with her, as so many gossipers and bloggers have detailed their stupid, tender moments. Makes you wanna barf. But Lou was human after all--and at least he tried to keep these snapshots to himself. And believe it or not, I think Lou died happy. Don't quote me on that, but I think he fooled us all.

All Grant Hart dates are listed, along with a stream of his LP, the trailer for his documentary, and the "JFK/NYC/OMG" flyer, below...

Grant Hart - The Argument (via The Guardian)

Every Everything: The Music, Life & Times of Grant Hart Trailer

Every Everything, the music, life & times of Grant Hart - promo teaser from Gorman Bechard on Vimeo. 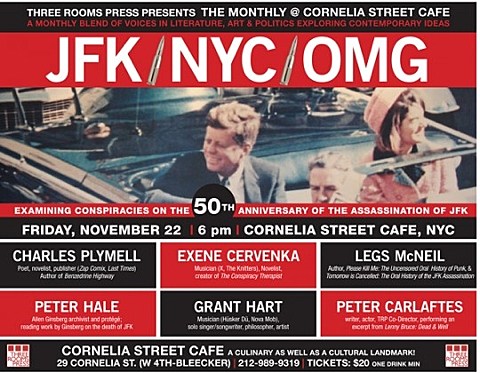