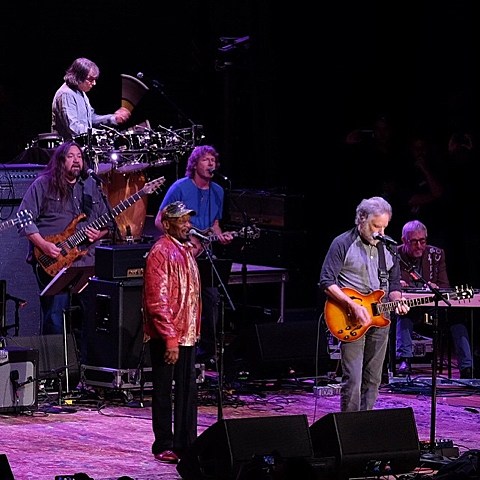 We're about a month and a half away from the four surviving Grateful Dead members' five 50th anniversary shows (two in California, three in Chicago), ahead of that all four of them appeared at yesterday's (5/14) Jerry Garcia tribute in Maryland, Dear Jerry. Phil Lesh, Bob Weir, Mickey Hart and Bill Kreutzmann all performed, and the latter three played together twice during the show: first for "Fire On The Mountain" with Jimmy Cliff, and then again for "Touch of Grey." Phil opened the show with the band Communion, playing "The Wheel > Uncle John's Band," "Standing On The Moon," and "Liberty."

Jefferson Airplane/Hot Tuna's Jorma Kaukonen did the Dead's "Sugaree," Bill joined the Disco Biscuits for "Scarlet Begonias > I Know You Rider," and Bob joined Los Lobos for "Not Fade Away > Bertha." Jimmy Cliff also did his own song "The Harder They Come," which Jerry covered many times. The show ended with most of the nights' performers coming out for "Ripple." Check out videos and the full setlist below.

Today's the last day you can access the $50-discounted presale for the pay-per-view webcast of the Dead's Chicago shows. If you're in the NYC-area and looking to watch the broadcast with professional sound, tickets for the live simulcasts at Capitol Theatre and Brooklyn Bowl go on sale at noon and 1 PM, respectively.

Dear Jerry videos and setlist below...