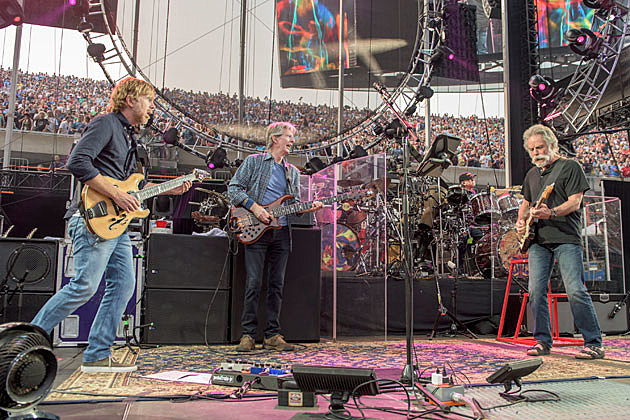 There was a rumor that the Grateful Dead would be touring with John Mayer. That rumor is now basically confirmed, though Phil Lesh isn't taking part in it. Surviving Dead members Bob Weir, Mickey Hart and Bill Kreutzmann are teaming up with Mayer (plus RatDog/Furthur's Jeff Chimenti and Allman Brothers Band's Oteil Burbridge) as "Dead & Company." Their first confirmed date is NYC's Madison Square Garden on Halloween. Tickets go on sale Friday, August 14 at 10 AM with an AmEx presale starting Monday, August 10 at 10 AM.

With Phil Lesh's absence, it remains true that the Chicago shows were in fact the final ones with all four of them. Phil is also playing his own NYC-area show on Halloween at the Capitol Theatre, which is part of a six-show run at that venue.

In related news, Bobby, Mickey and Bill were recently added to Lockn' Fest, which Phil was already confirmed for (though they're billed separately). Hot Tuna (playing a Jefferson Airplane set and an acoustic set), Robert Plant, Carlos Santana (playing on his own and with Phil Lesh) and more are also playing. Tickets are still available.