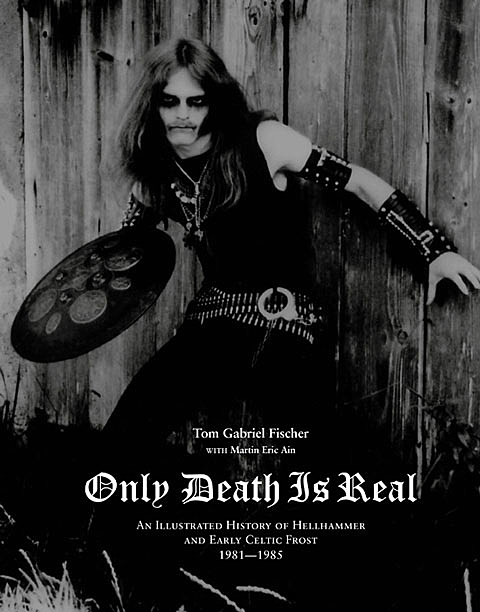 [Only Death Is Real] combines hundreds of unseen early Hellhammer and Celtic Frost photos with a vast treasure trove of artwork and memorabilia. A substantial written component by Fischer details his upbringing on the outskirts of Zurich, Switzerland, and the hardships and triumphs he faced bringing the visions of his groundbreaking bands Hellhammer and eventually Celtic Frost to reality.

Without question Only Death Is Real goes farther than any other source in exploring the origins of underground heavy metal.... the written chapters combine Tom Fischer's often shocking stories with lengthy quotes from Martin Eric Ain and the other main Hellhammer members, explaining in intimately human terms how extreme metal was born.

For a fan of any of those bands it's a killer look (in photo and verbal history) into the mind of the band. It also details the pre-Hellhammer days and Tom Warrior's early band Grave Hill.

Though I can't really confirm that the name of Tom Warrior's band was their inspiration, I do know that the current band named Gravehill (one word), from the bleak stretches of California, toil in some of the same murky waters as Hellhammer. The old-school death metal team are on the road with Cardiac Arrest and HOD, and will team up with Philadelphia's Gorephobia for an NYC show at Fontana's on July 13th. They hit Dingbatz in Clifton, NJ one day earlier.

Cardica Arrest's Haven For The Insane impacts on June 8th on Ibex Moon. Gravehill's Rites Of The Pentagram is out NOW via the same label.

Full Gravehill dates and some videos are below...