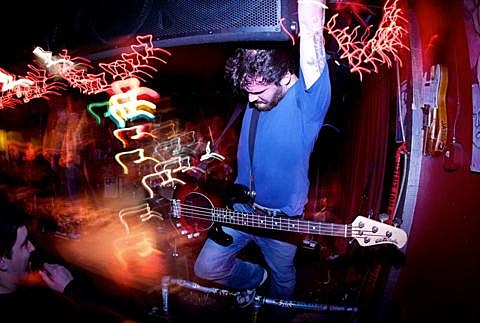 Oh, how I long for the days of late-'90s/early-'00s metallic hardcore. One of my favorite bands from that era was Kiss It Goodbye, who recently played a reunion show in NYC. Back when KIG initially split in the late 90s, several of its members drifted into Playing Enemy, who had a strong run of their own before splitting up in 2006.

Now that Playing Enemy is toast, guitarist Demian Johnston (who goes all the way back to the KIG days) and Decibel contributor Shane Mehling (also of Playing Enemy) keep the noise riffs coming in Great Falls. We debuted an awesome song from their new album Accidents Grotesque over at Invisible Oranges yesterday eve. From our writeup:

The band recently replaced their drum machine with former Jesu drummer Phil Petrocelli, who turns in a virtuoso performance here. He and Mehling zig and zag beneath Johnston's signature trenchant chord work, but they deliver with a laser-focused intensity that reminds me of the latter days of former Playing Enemy labelmates Anodyne. Johnston's riffwork here is among the best of his career; the recurring pressurized groove in "Milk From Treason" is catchier than anything so jagged has any right to be.

Stream "Milk From Treason" below, or check out the full writeup over at IO.