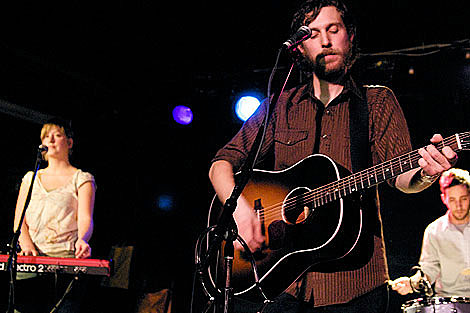 THE DEADBOLT: Back in May you guys played a number of shows over in Europe. How does it feel to be recognized outside of North America like that?

[Tony] DEKKER of GLS: It's really great. But at the same time I think that's where we were first sort of recognized. We've been playing shows in Europe now for the last five years, and we had a really good start there when the first record came out, and we've been going back ever since. But obviously it feels great to be sort of a Canadian ambassador over there and it's nice that people are recognizing Canadian music more, in general, around the world. I think the eye is on Canada right now and has been for the last couple of years. So it feels really great to be a part of that for sure.

THE DEADBOLT: Since you grew up around Lake Erie, have you swam in all of the Great Lakes?

The Polaris Prize nominated Great Lake Swimmers are leaving their native Canada for a five-week tour of the lower 48 this fall. The band comes to NYC for a show at the Bowery Ballroom on September 27th and gig at the Music Hall of Wiliamsburg on September 28th. No openers have been announced yet, but tickets to both of those shows are on sale now.

Last winter, the band recorded several of its Lost Channels songs in a video series dubbed The Legion Sessions. See "Stealing Tomorrow" from that, along with video of an appearance on BriTunes, with all tour dates, below...