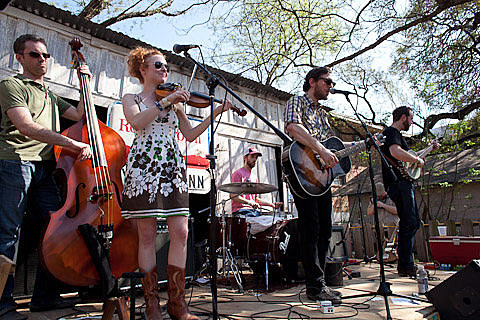 Toronto indie folk band Great Lake Swimmers are set to tour Europe with Holy Fuck side project Dusted but before that they'll play a few East Coast US dates with indie pop duo Snowblink, who just joined their Arts & Crafts labelmate Feist during her performance at the Polaris Prize Gala. (Great Lake Swimmers were nominated for the Polaris Long List but didn't make it to the Short List.) Those dates include a NYC show which happens on October 4 at The Bell House. Tickets for that show are on sale now. All Great Lake Swimmers dates are listed below.

Snowblink released their new album, Inner Classics, earlier this month (9/11) via Arts & Crafts. You can download album's single, "Black & White Mountains," above and watch its video below.

Speaking of Dusted, they'll be in NYC when their tour with Perfume Genius hits Music Hall of Williamsburg (10/8) (tickets) and Le Poisson Rouge (10/9) (tickets). They're also set to come to NYC for CMJ, though no specific shows have been announced yet.

All lists of dates and that Snowblink video are below...