Green Day's classic 1997 album Nimrod came out 25 years ago today, and to celebrate, the band are releasing a 25th anniversary edition box set that features the original album, a disc of previously unreleased demos, and a live set from Philly's Electric Factory that was recorded on November 14, 1997. The demos disc includes two never-before-released Green Day songs, "You Irritate Me" and "Tre Polka," plus a previously unreleased cover of Elvis Costello's "Alison." "You Irritate Me" is out now, and it's a classic '90s Green Day ripper that almost sounds a little more like Dookie and Insomniac than Nimrod. It's a genuinely great song (and sounds pretty damn polished for a "demo"), and it's kinda crazy to think they kept this in the vaults for 25 years. Check it out below.

In our list of great punk albums from 1997 we wrote:

Nimrod was, at the time, Green Day's most ambitious album yet. They pretty much perfected their brand of Americanized, Buzzcocks-ian pop punk on 1995's Insomniac (their best record), and they churned out a few more songs like that on Nimrod ("Nice Guys Finish Last," "Scattered," "Jinx," and the best of them all, "The Grouch") and even dipped their toes into harder, faster, hardcore-tinged punk ("Platypus [I Hate You]" and "Take Back"), but even those songs were produced in a warmer, milder alternative rock way than the tightly wound pop punk they became famous for. And elsewhere on the album, Green Day started drastically expanding their palette, dabbling in pre- and early rock stylings on "Hitchin' A Ride," "King For A Day," and "Last Ride In," dishing out punk balladry on "Redundant" and "Walking Alone," and most significantly of all, they released the acoustic song "Good Riddance (Time of Your Life)," the song your mom who didn't want you listening to "Longview" could like and the song that would be played at graduations for the next two decades. Billie Joe might've sung "I was a young boy that had big plans, now I'm just another shitty old man" on "The Grouch," but no song represented Green Day's transition from snotty punk kids to regular ol' adults like "Time of Your Life." I'm being a little backhanded, but like, kudos to Green Day for bringing in a whole new audience with that song and having a rock-solid album to back it up.

Listen to the "new" song and check out the full tracklist below. Pre-order the box on silver or standard black vinyl in our store. 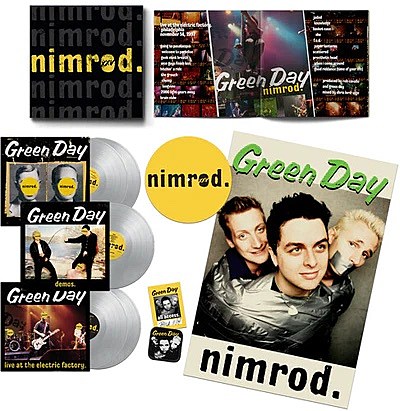