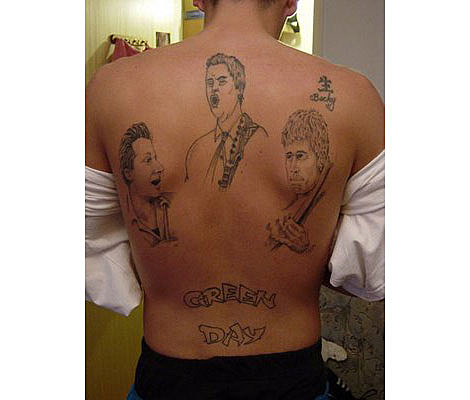 "For the first time ever, Green Day will be performing an exclusive show for their IDIOT CLUB members at New York's Bowery Ballroom on May 18th. This is the show you have been waiting for, join your fellow IDIOT CLUB members for a performance you will never forget! Head over to www.idiotclub.com and get more info!" (thx Brian)

So, Green Day's NYC schedule looks something like this: 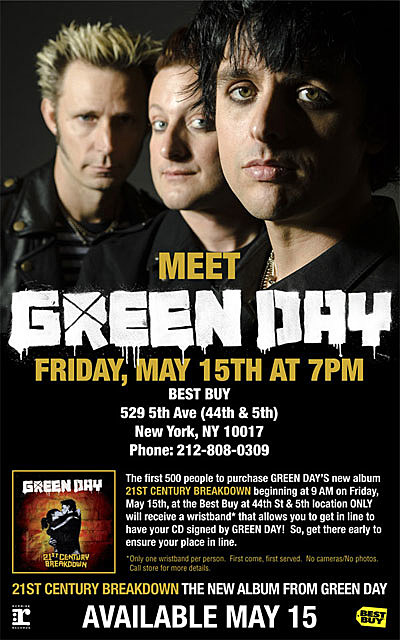 Reprise Records' Grammy®Award winning rock band Green Day have announced that they will hit the road for their first proper tour of the United States and Canada in more than three years and feature a very special show at NY's famed Madison Square Garden for one night only, July 27, with special guests Kaiser Chiefs. Tickets for this show go on sale on Friday May 15 at 10 AM...

Green Day are touring in support of their long-awaited eighth studio album 21st Century Breakdown, which will be released globally by Reprise Records on Friday, May 15th, 2009. Singer-guitarist Billie Joe Armstrong, bassist Mike Dirnt, and drummer Tre Cool have been at work writing, arranging, and recording 21st Century Breakdown since early 2006 with producer Butch Vig (Nirvana, Smashing Pumpkins). The first single, "Know Your Enemy" was released to radio and digital retailers on April 16th.

Green Day recently performed 21st Century Breakdown in its entirety during a series of warm-up club shows for hometown fans in the Bay Area. In its review of a show at Oakland's Fox Theater, Rolling Stone commented that the band, augmented by guitarists Jason White and Jeff Matika, and keyboardist Jason Freese, had the "Quadrophenia-like hang of 21st Century Breakdown's classic rock melodies and lifetime-punk drive down solid" and that the album is "rock opera in which the rock always comes first." "21st Century Breakdown is Green Day's best album," the reviewer concluded, "and at the Fox, they proved that the rock opera can be as punk as a Clash 45."