Green Day on stage after their musical (via) 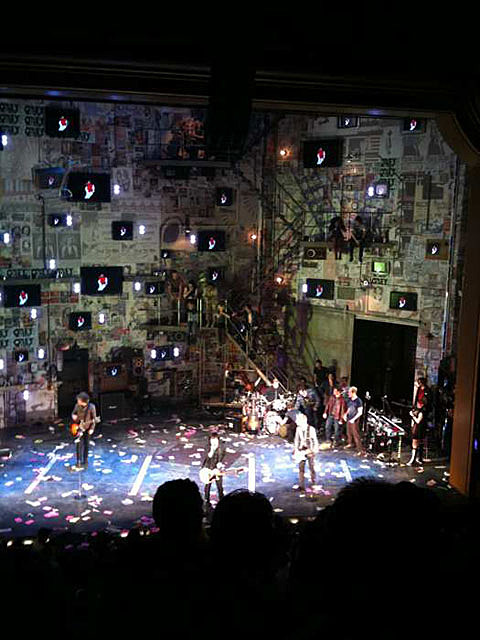 The Broadway show "American Idiot" turned into a rock concert with a supercharged encore: a surprise appearance by Green Day, the band that wrote the music.

The three-man band, and an additional guitarist, took to the stage after Thursday's show as girls in the audience screamed. The show opened Tuesday, and the producers may wish that Green Day would show up regularly.

"This is my first night on Broadway," the singer-guitarist Billie Joe Armstrong declared, then blared out the opening power chords of "American Idiot," the show's title song. In the first verse, he sang: "Can you hear the sound of hysteria? The subliminal mind BEEP America," censoring himself. [NY Times]

That was last night. Less of a surprise will be the following shows that Green Day themselves are advertising (and as partially posted earlier today in the comments): "Friday, April 23rd - Early show! - 7:00 show Mystic Knights of the Cobras and The Foxboro Hottubs at Don Hills, NYC." and that "The Foxboro Hot Tubs will be performing live in New York on Sunday at Bowery Electric. Tickets are $20 at the door. Due to the massive amount of interest, The Bowery Electric will not allow lineups before 8pm on Sunday. Anyone arriving early will be asked to leave. Doors open at 11pm show starts at 11:30pm." Good luck getting in to those.

NOTE: one commenter says, "foxboro hot tubs is NOT the same as green day. it's the members of green day, but they are an entirely different band. they will NOT be playing green day songs at the concert; they have their own album, etc."

And as some suggested in the comments earlier, Green Day should also play some benefit shows for 924 Gilman when you get back out west.