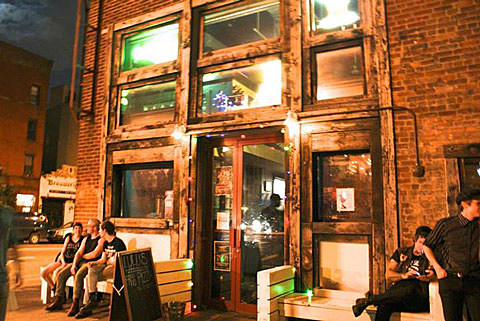 And another one goes. One of the original free-pizza-with-beer bars in North Brooklyn (that also hosted free music a lot of nights), Lulu's in Greenpoint, will be shutting it's doors for good on August 9. From the venue's Facebook:

To our amazing customers: It is with a heavy heart that I tell you that the rumors are true. Lulu's will be closing its doors in two weeks; our last day open will be August 9th. We would like to thank all of you for making this such an amazing place to hang out! The customers at this bar are the best ever and I'm not just saying that Please stay tuned as there are a lot of fun shows in the next couple of weeks, with our grand finale show on August 9th to be announced soon. - Lulu's

Greenpointers informs us that Lulu's closing comes over a dispute with the landlord when owners wanted to turn it into a gay bar:

In April of this year Lulu's owner John McGillion took out a lawsuit against his landlord for not allowing him to turn the establishment into a gay bar. According to the New York Post, McGillion stated that he was "barely scraping by on the proceeds of the bar" and felt that he would "be able to make a considerable profit" by making Lulu's a gay venue. The landlord's alleged (and shocking) 'anti-gay clause' stopped this idea from ever coming to fruition.

Lulu's, we're sad to see you go, especially under such circumstances. There's still a week still to enjoy the music, drinks and free pizza. Friday (8/1) there's a solid bill of local punk with Ivy, Ajax, and Nandas.