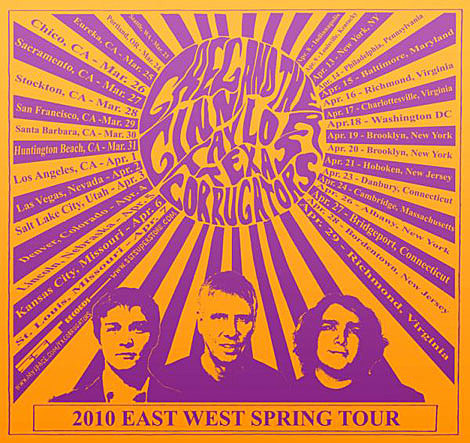 Gregory Regis Ginn (born June 8, 1954) is a guitarist, songwriter and singer. He is best known for being the leader of and primary songwriter for the hardcore punk band Black Flag, which he founded and led from 1976 to 1986.
Since breaking up Black Flag, Ginn has recorded a few solo albums, and has performed with the bands HOR, Fastgato, October Faction, Gone, Confront James, EL BAD, Mojack, The Texas Corrugators, Jambang, and he also played bass with Tom Troccoli's Dog. He also owns the Texas-based, independent record label, SST, originally begun as an electronics company called Solid State Transmitters when he was a teenager in Long Beach, California. He remains very active in music; in a recent interview he states he still performs "about six nights a week."
...Ginn made it to 99th on Rolling Stone's list of "The 100 Greatest Guitarists of All Time" -[Wiki]

Greg Ginn played all the instruments in the recorded output for Greg Ginn and The Taylor Texas Corrugators (downloadable for free), but he and a band are currently on the road through the beginning of May. Those dates include four NYC-area shows. Three are with the CSC Funk Band (ex-USAISAMONSTER) in the five boroughs. A fourth is at Maxwell's with Cinema Cinema. Black metal darkness from Malkuth will manifest the first date which goes down at Cake Shop on 4/13. After heading down as far as Charlottesville, the band will be back to haunt Issue Project Room with their jammy country influenced jazz on Mon 4/19, followed by Zebulon the following day, and finally Maxwell's to sew it all up on 4/21.

Full tour dates and some videos are below.