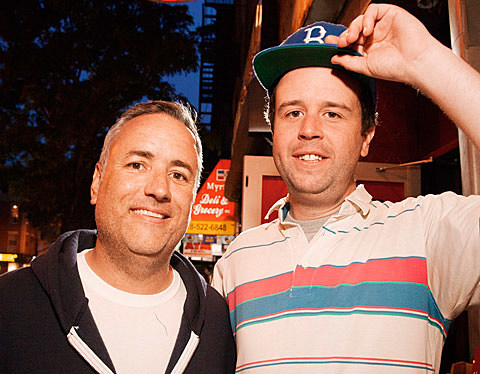 New York City has always been a hotbed of recurring comedy showcases, but I feel like now more than ever we are having a serious Renaissance of comedy. Thank Cod for Hy Bender's religiously updated show-bible Best New York Comedy; he is literally the only person in NYC providing daily summaries of what's happening comedy-wise. It must be exhausting keeping that monster of a website alive. These days I don't get out to as many comedy shows as I would like, so for me my comedy Renaissance was in the pre-2009 era and revolved around legendary venue Rififi.

Rififi will always be regarded as a sort of Mecca to me as it was the right venue at the right time and had a weekly roster of recurring comedy shows that absolutely dominated the scene at the time. Obviously, Invite Them Up was the Godfather of comedy showcases, but my all time favorite Rififi showcase had to be The Greg Johnson and Larry Murphy Show, which had the coveted Friday night slot, which meant I could drink my balls off and not have to worry about getting up for work the next day, which means my memories of the show are all euphorically wonderful though extremely hazy. The reason this show had an edge over Invite Them Up (a miniscule edge but an edge nonetheless) was because Greg and Larry not only booked a similar caliber of top-shelf guests as ITU, but because of how much I truly love Greg Johnson and Larry Murphy as comedians and performers. On the one hand, you have Greg Johnson who is a classic stand-up comedian who is all about economical and brilliant set-up and delivery. On the other hand, you have Larry Murphy who is more renowned for his voice-work (Assy McGee, Bob's Burgers, Home Movies) and his varying onstage personas, including Sal Lupo, a cabbie from Canarsie, who is one of my favorite comedic creations of all time. (Check out a video below.) When Rififi died, this masterpiece of a show died with it. As did a large piece of my soul. It sucked.

Flash forward to February 27, 2014; Greg Johnson and Larry Murphy joined forces again for a new weekly comedy showcase called Myrtle Comedy With Larry Murphy and Greg Johnson taking place at Splitty (415 Myrtle Ave, Brooklyn). The premier installment featured Jon Benjamin, Eugene Mirman, James Patterson, and Kate Berlant. Nearly six months later and the show has been going on strong ever since, bringing with it a vibe that I thought died when Rififi shuttered its doors. It's a shame I never mentioned it earlier because the line-ups have been absolutely stacked. Their next installment is happening on Thursday (7/10) and features Jon Glaser, Jessi Klein, Giulia Rossi, and a secret special guest. The show is only 5 bucks. They're there every Thursday with mammoth line-ups, so if you can't make it tomorrow don't flip out. There's always next week. And the week after. And hopefully every Thursday from now until Brooklyn becomes property of Disney.