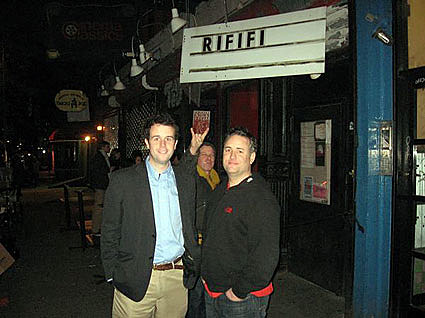 Why? Because every Friday night (this month at least) Rififi (332 east 11th, b/t 1st and 2nd) plays host to The Greg Johnson and Larry Murphy Show. If I wasn't so lazy/busy, I would have finished my Top Ten Best Things In Comedy In 2007 list for BV; a list that would have had the ECNY Award Winning Greg Johnson and Larry Murphy Show at the #1 slot. Every single week the line-ups their myspace bulletins boast are so packed with top-shelf talent that I often think Greg and Larry are the biggest liars in the business. But then I show up to the show and, sure enough, they deliver what they promised for a mere $5. Here's what makes tonight's show so great.....

The Whitest Kids U Know will be there. They are tops. Their season 1 DVD came out on Tuesday. They recorded a live show at the Tribeca Center for The Performing Arts last night that will eventually air on IFC and season 2 of their show premiers Sunday at 11pm on IFC. These guys are big time. Big.

Human Giant will be there. MAYBE ALL OF THEM. Will Paul Scheer, Rob Huebel, and Aziz Ansari stop by? All of them? One of them? Two of them? Will they show a video? Do a live thing? I can't tell you. Show up and find out. I can tell you that they've got season 1 coming out on DVD March 4 and season 2 premiering on March 11. AND they've got a massive tour coming up. I've seen some of the new stuff and it's insane.

Nick Kroll will be there. Nick is one of my favorite comedians out there. Whether he's Fabrice Fabrice, 50% of Oh, Hello, or doing stand-up, Nick makes me laugh a lot harder than most people. Definitely go to his myspace page and watch all of his videos to get a sense of this man's scope.

Chelsea Peretti will be there. She's the C in Variety Shac, has a ton of really funny videos on SuperDeluxe, and is a truly superior comedian. Completely, totally, I shit you not, 100% one of my favorites.

Patrick Borelli will be there. Patrick Borelli is a mega-talented writer, comedian, creator, whose default myspace picture looks nothing like him. His brains helped create two episodes Assy McGee. He worked with Matt Hall and Jon Benjamin on the recently released SuperDeluxe show called Thunderpoint (not to be confused with Thunderant, people).

All this for $5. After the comedy is over, all beers (except Guiness) will be $3. And you'll totally hook up.