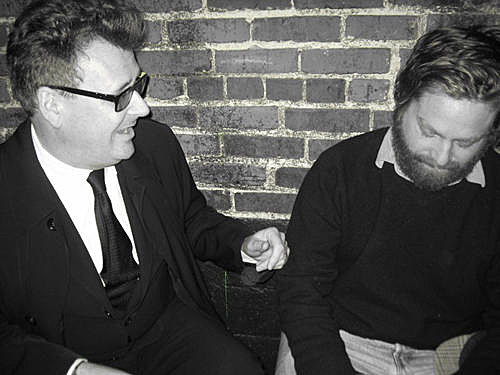 Back in, I think, 2004, I caught a really great Todd Barry show at Carolines in Times Square. This was right around the time when his incredible comedy album Falling Off The Bone dropped. I actually bought a copy from Todd in the lobby after the show. Anyhow, the thing you have to understand about Carolines is that it is the ultimate archetype of mainstream, 2-drink minimum comedy clubs; black and white pictures of past A-list performers all over the place, clean, semi-cheesy architecture, and clientele consisting mainly of tourists. Prior to being seated, everyone gets tightly corralled in an ante-lounge until they start letting people into the showroom a few at a time. It's very fucking annoying and if you suffer even the slightest claustrophobia you best prepare yourself for a flare-up. So anyway, prior to Todd's performance, as my fellow sheep and I were trying not to rub up against each other in the packed ante-lounge, this out-of-town-probably-from-Wisconsin-couple who were probably nearing their 70s were practically jizzing all over themselves looking at the pictures of past A-list performers. At one point, wife exclaims "Oh my gahd honeee! Mike Shoop! Mike Shoop performed here!"

You may be asking yourself "Klaus. Who the hell is Mike Shoop?" Exactly. Who the hell IS Mike Shoop? The answer is simple; there is no Mike Shoop, people! These idiots were pointing at a photograph of the great GREG PROOPS, one of my absolute all time favorite comedians who I've liked since way before I even realized I was a huge fan of comedy in general. Most people recognize Greg as that one guy from the American version of Whose Line Is It Anyway who looks like he could be a sax player in a 3rd wave Ska band (as a matter of fact, host Drew Carey, at the time, looked like a trombone player of a 3rd wave Ska band). Greg's skills as an improv comic and a stand up comic are among the sharpest in the biz and I think he is criminally underrated, especially within the indie comedy community.

Podcasting is another skill Proops can add to his arsenal of comedic agilities. In his podcast Greg Proops is The Smartest Man in the World, Proops

takes center stage at small table and chair setup with a single microphone. Then he's off. An hour of great conversation that flies by at a break neck clip. He crams the feeling of a great two-way conversation into the lecture-style format of a one-way conversation.

This is one of the most addictive podcasts I've ever heard and I am jjizzing MYSELF over the fact the he will be doing a live podcast taping in Brooklyn at the Bell House on Saturday January 19th, 2013 at 8:30pm. Tickets are currently on sale and I urge you, one and all, to do yourselves a favor and go to this event. The amount of podcasts at our disposal these days is overwhelming but this one is an absolute stand out. The Bell House is one of many live podcast events Proops is doing, so check out the full list of dates below.