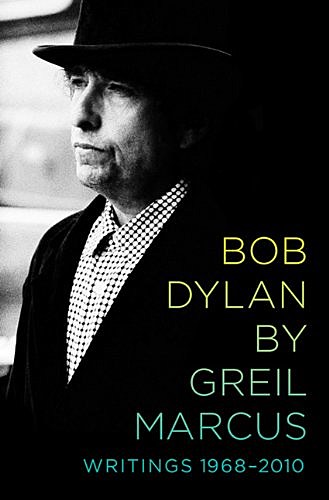 Bob Dylan by Greil Marcus: Writings 1968-2010 was recently released, just in time for the holidays...

"The book begins in Berkeley in 1968, and ends with a piece on Dylan's show at the University of Minnesota--his very first appearance at his alma mater--on election night 2008. In between are moments of euphoric discovery: From Marcus's liner notes for the 1967 Basement Tapes (pop music's most famous bootlegged archives) to his exploration of Dylan's reimagining of the American experience in the 1997 Time Out of Mind. And rejection; Marcus's Rolling Stone piece on Dylan's album Self Portrait--often called the most famous record review ever written--began with "What is this shit?" and led to his departure from the magazine for five years. Marcus follows not only recordings but performances, books, movies, and all manner of highways and byways in which Bob Dylan has made himself felt in our culture.

Together the dozens of pieces collected here comprise a portrait of how, throughout his career, Bob Dylan has drawn upon and reinvented the landscape of traditional American song, its myths and choruses, heroes and villains. They are the result of a more than forty-year engagement between an unparalleled singer and a uniquely acute listener."

You can buy it at Amazon, or maybe pick up a copy at the Strand tonight, 12/1, where Greil will be speaking in conversation with Stephen Hazan Arnoff, Director of the 14th Street Y, "and special guests Matt and Eleanor Friedberger of the Fiery Furnaces, who will perform a few songs."

Eleanor & Matt Friedberger will also be on hand at the 14th St Y and Le Poisson Rouge on Sunday, December 5th, for a day of Dylan events. The concert at LPR is this:

$35 tickets are still on sale for that part, and $75 tickets which I guess get you into everything at both spaces, are on sale too. If you just want in the symposium happening at the Y, that's $45, described as "a one-of-a-kind exploration of Bob Dylan and the Band's work, featuring scholars, critics, writers, and artists"

Christopher Ricks: Renowned critic and scholar of English literature and poetry, and author of Dylan's Visions of Sin.

John Niven: Novelist whose book Music from Big Pink vividly imagines the world of Bob Dylan and The Band.

Dana Spiotta: Author of mesmerizing portraits of the 60's underground, including Eat the Document.

Bob Dylan himself, who recently played three nights in a row at NYC's Terminal 5, is not listed anywhere. Maybe he'll come watch. More info on the whole thing at 14th St. Y's site.

John Wesley Harding also has a show coming up at City Winery.