Greys at Shea Stadium in July (more by Vladislav Grach) 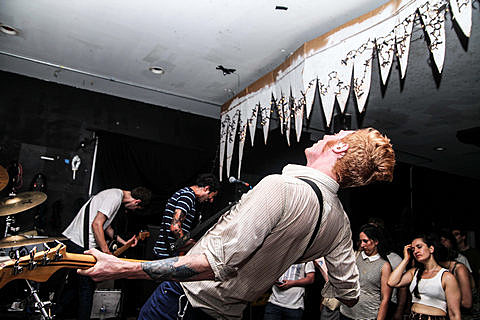 The most intense band I had seen at CMJ so far was Joanna Gruesome, but after catching Greys at the Brixton Agency/MezzoForte showcase at Grand Victory last night (10/17), they give JG a run for their money. The noise punk band hails from Toronto and the most immediate comparison is their likeminded neighbors METZ (though both bands hearken back to the late '80s/early '90s), and like that band Greys are an utter force that you just have to see live. Greys set up with half of their members on the floor, encouraged the audience to tightly surround them, and were easily the loudest band on the bill. Especially if you're a heavy band, power and precision are pretty much requirements, not luxuries, but Greys have so much of both that I managed to get caught off guard by their tightness a few times. That could give a band some bragging rights, but they were humble for the whole set. No pics unfortunately (the one above is from their Shea show in July).