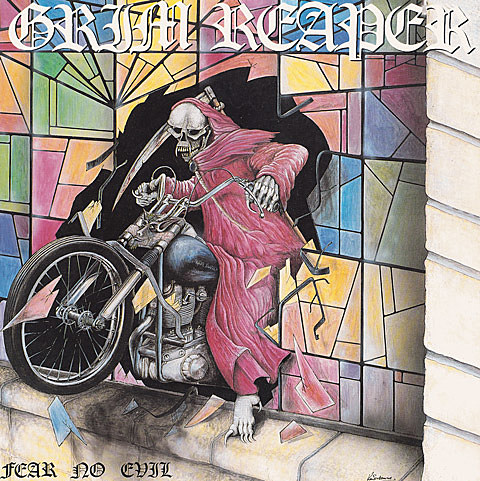 NWOBHM bangers Grim Reaper are following up their first appearance on a US stage in over 25 years with U.S. shows in NYC and L.A. Original falsetto paint-peeler Steve Grimmett will faithfully wail Grim Reaper classics, and possible new material from their forthcoming fourth LP, on June 10 & 11 at Saint Vitus in Brooklyn. Tickets for both dates are available now with supporting slots still to be announced. After the NYC show, Grim Reaper head to LA to play Whiskey A Go Go on June 15.

Grim Reaper, now the concern of sole-remaining member Steve Grimmett and a rotating cast of musicians, played Chicago's Ragnarrokr festival on April 5, giving American fans a rare opportunity to hear cuts culled from their three '80s LPs, including the one owning the Meatloaf-daydream album art shown above. Known for their synthesis of studded metal leather and catchy choruses gilded with Grimmett's gutsy belting, Grim Reaper steadily built a sizable fanbase in the UK, often crossing paths with contemporaneous NWOBHM heavies like Iron Maiden. Unfortunately, their ill-promoted third album, 1987's See You In Hell, resulted in a record label drop and, consequently, ended their careers. That is, until Grimmett, who also did a stint with thrashers Onslaught, revived the name in 2006.

Currently on tour in South America, Grimmett recently revealed Reaper is working on an album of new material. No release date has been set, as of yet.

New Judas Priest and Grim Reaper? Did we fall into a time vortex†or are we having another dimension's '80s Fringe event? No matter, get ready for the show with selected streams below.