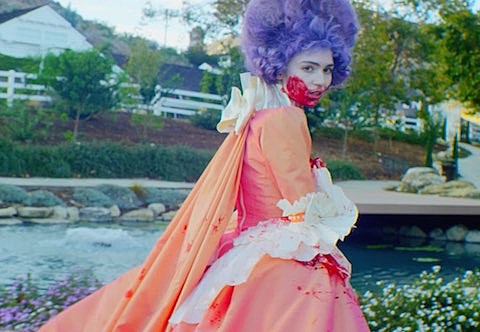 Grimes finally announced her new album Art Angels last week. Then she teased new music on Instagram (now deleted) and then played new songs at Beach Goth fest over the weekend. Now she's officially premiering the first single from the album, "Flesh Without Blood," on Annie Mac's BBC Radio 1 show. The song will play at 3:30 PM EST (so like in 5 minutes). They'll play it twice and Annie will also interview her. Listen HERE.

UPDATE: It's playing on Annie Mac's show and she also just dropped the joint video for that track and another, "Life In The Vivid Dream." The video was written, directed, edited, colored and art directed by Grimes, and she plays four separate characters in it with lots of costume changes and fake blood. Grimes adds, "fyi - every song on this album is a completely different style, so flesh isn't a 'representation' of everything, just a taste of a vibe." Watch below.

She also announced that the album will officially be out next week (November 6) via 4AD and revealed the tracklist, including a song that features Janelle Monae. Check that out below too.

Grimes' tour hits NYC first on November 4 at the Guggenheim's International Gala Pre-Party (tickets). Then her run of dates with her signee Nicole Dollanganger hits Terminal 5 on November 16 at Terminal 5 and MHOW on November 18 (both sold out). Right in between those, Nicole plays her own NYC show at Baby's All Right (11/17) (tickets).

UPDATE 2: Grimes was also interviewed about the new song by Jenny Eliscu for Sirius XMU. You can listen to that below...