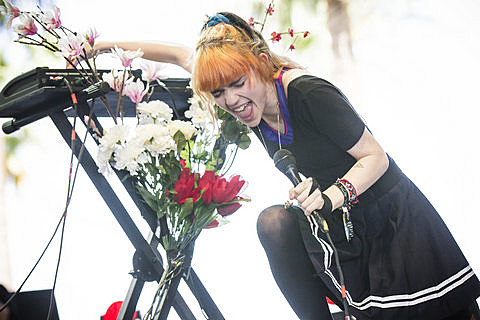 Traffic hasn't been as bad around the Barclays Center as opponents thought it would be when the Brooklyn arena was first announced. We think that may not be true this Sunday (8/25) though as MTV takes over the room to film the live telecast of the VMAs. Everyone from Kanye West to Katy Perry to Daft Punk to Robin Thicke are going to be there or are rumored to be there. Prince is in town. So is Perez Hilton.

Grimes (who is not shy about her love of pop) is getting in on the action too. MTV Hive reports:

The 2013 Video Music Awards are near, and to herald their arrival on Sunday, August 25, MTV is launching the VMA All Access Experience, 5 days of livestreamed performances and VMA moments starting NOW! And, get this, Grimes will be making a special appearance!

Show day, however, has got MTV Hive pumped -- not only because the 2013 Video Music Awards features the likes of Lady Gaga, Justin Timberlake and Kanye West, but because Grimes, along with designer Rachel Antonoff, will co-host MTV Style's Red Carpet Report (6 p.m. ET Sunday). Perhaps she'll wear one of her pussy rings? One can dream.

Meanwhile, Justin Timberlake will be receiving the Michael Jackson Video Vanguard Award during the VMAs, and it's been announced that his 'History of Rap' partner Jimmy Fallon will be the one presenting it to him. Justin is also rumored to be reuniting on stage at the VMAs with his old boy band *NSYNC. Maybe you've heard of them.

You can watch the broadcast on vma.mtv.com.

Later this year (and more South), Grimes will be playing some festivals, including Austin's ACL Fest in October, Mexico City's Corona Capital Fest in October, and a Young Turks party in Mexico on New Year's Eve.