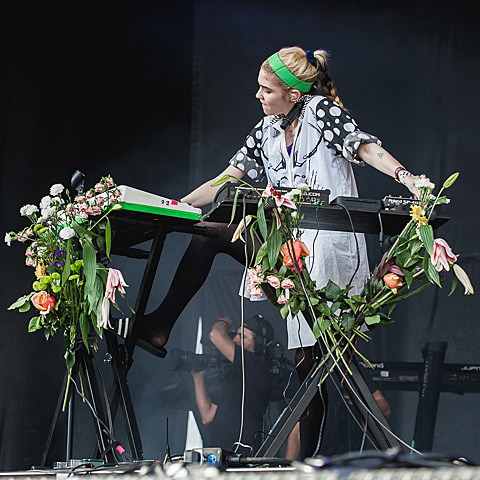 Whether it's to criticize her or praise her, it's hard to deny that people like talking about Grimes' musical opinions. Her top 10 albums of 2012 list included the most pop (Taylor Swift, Justin Bieber) AND the least pop (Swans), and she totally meant it too. She's defended Beyonce, Mariah Carey, and pop music in general, and denied accusations of trolling when her Boiler Room set included Taylor Swift, Maria Carey, Ramones, Skrillex, and others.

Grimes has now published a list to her tumblr of her favorite songs of all time. It continues her trend of pulling from pop and experimental music with songs from Burial, Mariah Carey, Joanna Newsom, Beyonce, Mazzy Star, Skrillex, Animal Collective, Butthole Surfers, Paramore and more. It's not only newer stuff though, she's also got Patsy Cline, Prince, and Enya, among others.

Check out her whole list (subject to change), via Exclaim, below...

taylor swift i knew u were trouble //

alicia keys if i aint got u

majical cloudz i do sing for u

enya???? bodicea or however u spell

+ dummy in its entirety

all of swan lake

elliot smith between the bars

mazzy star fade into you

themselves grass skirt and fruit hat

kanye lost in the world

all of ghost in the shell soundtrack

animal collective in the flowers

paramore - thats what u get

flow child - less of it, more of having