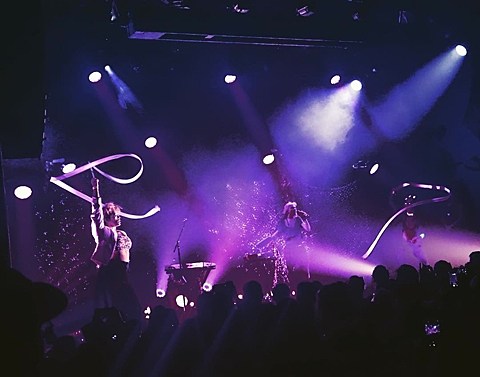 Grimes' tour hit Music Hall of Williamsburg last night (11/18) for its second proper NYC show after Terminal 5 on Monday (third total including the Guggenheim Gala). Like at T5, she was sick and played a short set (45 minutes, no encore) and even though I wished it would've been twice as long she was on fire the whole time.

I'd somehow never seen Grimes before -- there were a few times I almost did and for one reason or another it didn't happen -- but I've been told more than once that her shows could be a little awkward or not fleshed-out enough. Well, if that was ever true it certainly isn't now. She's a crazy-confident performer, switching from manipulating her samplers to joining her very athletic dancers at the front of the stage and going absolutely nuts. The light show is vivid, her backup singer adds a lot. Really everything just looks and sounds so great. And being that it was a shortened set, she made up for that a bit by sticking exclusively to bangers. We got "Genesis" and "Oblivion" off Visions, pre-Art Angels singles "Go" and "REALiTi" (the latter of which did end up on the album), and key Art Angels standouts "SCREAM" (which features Aristophanes, who joined her on stage), "Venus Fly" (which features Janelle Monae, who did not) and "Kill v. Maim." If you're wondering, no she didn't play "Flesh Without Blood" (she didn't at T5 either).

Her tourmate and signee Nicole Dollanganger (who also played Baby's a night earlier) opened. She's an interesting match for Grimes. She also plays with electronics and a mic and her voice is sometimes similar to Claire's, but her two-piece backing band is very different. She's backed by two dudes -- one on bass and one on guitar/kick drum/hi-hats -- who look more like they're aiming to open for Lamb of God than Grimes. The bassist hunches over his bass and stares at the crowd in a "metal band being intimidating" way and the guitarist yelled at the crowd twice to "SHUT THE FUCK UP" in between songs. I'll admit it was kinda weird to watch, but it sounded pretty good. The contrast of Nicole's delicate high-pitched vocals over the crunchy/doomy guitar was almost like Chelsea Wolfe's new album or something like that. The live show could use a little work (and maybe an actual drummer) but the songs are very promising.

The show was presented by Steven Madden Music (which has also put on Santigold, Lucius and more shows at MHOW) and as usual, that meant it was an intimate venue for the headliner and totally free. It filled up pretty quick (I think it hit capacity around 8:45) and even by the time Grimes was setting up there was still a line wrapped around the block of people trying to get in.

Check out a few more instagrams and Grimes' setlist below...