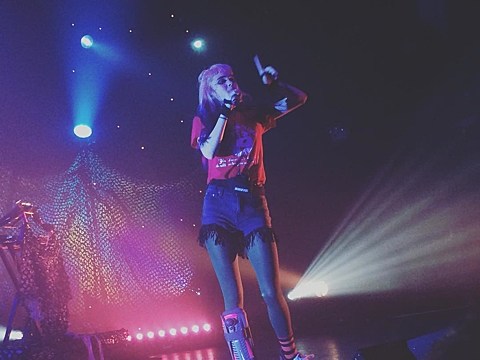 Grimes recently began her tour in support of this year's great Art Angels on 4AD (which is already making year-end lists). She was already in NYC earlier this month to play the Guggenheim's International Gala Pre-Party before the album was out, but last night was her first of two proper club shows supporting it. It was at Terminal 5, and had sold out way in advance. NYC musician Fasano was there, and said, "Grimes blew up Terminal 5. It felt huge and intimate at the same time. I've never seen anything like that. And she had the flu." The Village Voice was also there, and wrote:

When she took the stage (along with a pair of ceaseless, synchronized dancers), Boucher cavorted through Visions hits "Genesis" and "Oblivion," as well as a peppering of deeper cuts "Circumambient" and "Symphonia IX (My Wait is U)" off her 2012 LP. Boucher also welcomed Taiwanese rapper Aristophanes onstage for the Art Angels banger "SCREAM" to perform her rapid-fire rapping verses live to a receptive crowd. "Go" and "REALiTi" nearly brought the house down, with peppy Angels number "Kill v. Maim" (Boucher's personal favorite, she told the crowd) rounding out the encore. A set of less than a dozen songs nonetheless felt like a well-needed sugar rush at the end of the night.

Boucher, ever the multitasker, spent the majority of the performance moving back and forth from her synths at centerstage to the edge of the crowd - an oddly fitting display for the music she's been producing and performing herself. She was also playing to a passionate audience: Multiple instances of "Grimes, I love you so fucking much!" could be heard from the jam-packed house. That may make for pretty typical gig banter, but it isn't heard too often with such earnestness.

As that review points out, Aristophanes came out for "SCREAM," and you can watch a video of that below (via Stereogum). A few more pictures and the setlist are below too.

Opening the show was her tourmate Nicole Dollanganger, who recently signed to Grimes' label, Eerie Organization. Nicole plays her own NYC show tonight (11/17) at Baby's All Right with Foxes In Fiction and Emily Reo (tickets), and Grimes and Nicole play NYC again on Wednesday (11/18) at MHOW (sold out).