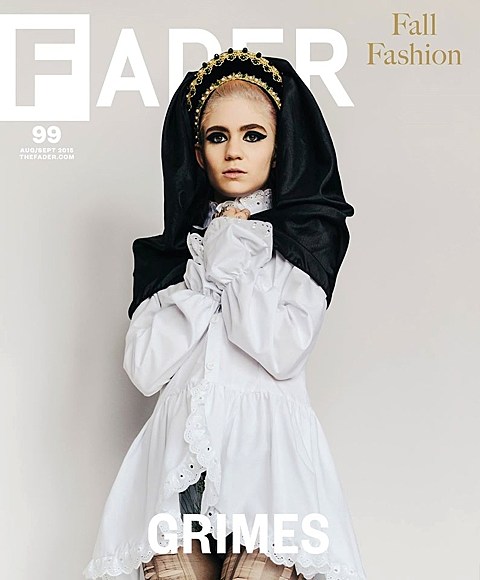 Grimes, who is on the cover of FADER, spoke in her cover story for the issue on her anticipated followup to 2012's Visions. We're still waiting on details like a title and a release date, but the interview does give some insight on the album. For one, it talks about the misconception that Grimes "scrapped" her new album after negative reactions to "Go," which was never intended for her new album anyway. Here's an excerpt:

While Visions wasn't Grimes' first album, it was the first to find widespread acclaim, giving the delay between that 2012 success and her announcement this past March that a follow-up was on the way the appearance of a sophomore slump. Still, Boucher says that starting over was worth it. "Everything I made after that was 10 times better," she says, explaining that the extra time gave her room to expand upon the electronic palette that Grimes had become known for and mine the '90s rock and punk and nu-metal that soundtracked her adolescence. "I want people to feel, if they're buying something, like I put my heart and soul into it and I improved myself as a person and a writer." Boucher recorded and self-engineered every instrument on the new album herself, including guitar, drums, keys, ukulele, and violin--but she had to learn how to play them first, in addition to mastering a whole new battery of production programs and learning how to mic her own vocals. (On one track, she used the very same tube condenser mic that Taylor Swift did to record Red, a fact that Boucher, a longtime fan of the country-star-turned-pop-idol, cites with pride).

The whole thing's a good read. Check it out here.

Grimes has a few live dates coming up, including Santa Ana's Beach Goth festival and Austin's Fun Fun Fun Fest. Right in between those, she'll come to NYC to play the 2015 Guggenheim International Gala Pre-party on November 4. $350 tickets are on sale now.