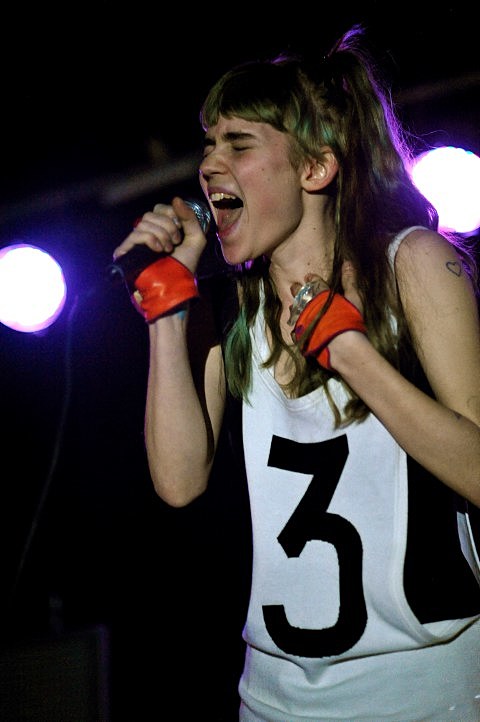 Immediately upon walking into the Mercury Lounge last night, for the 2nd of two Grimes shows, I was hit by a disorienting whir of blinking lights and pulsating electro-pop. It was the last song by Born Gold (formerly Gobble Gobble), and no theatrics were spared, down to garden shovel guitars, light-bulb studded jacket sleeves and odd, choreographed movements involving illuminated decorative fans. The wild, cacophonous final minutes of the performance were a lot to process as I fought to secure a clear sight line through the thick crowd. But the blissful visual and aural barrage emanating from the stage made me wish I had caught more of the set.

With hardly any time to rest since her earlier set, Grimes (i.e., Claire Boucher) emerged on stage for the second time of the evening. She snapped a few photographs of the sold-out crowd and was preparing to launch into her first song when she suddenly stopped herself and in rapid-fire-speak, briefed the crowd on her voice. "Oh yeah! Here's the thing. I'm like really sick. I was puking for a couple of days, and I had a really sore throat. So I'm really bad at hitting the high notes, so bear with me."

For an artist who draws so heavily from the upper octaves, Grimes' announcement had me a bit worried. And though her voice did lack some of its distinct chirpiness, her vocals took on a more washed out and ethereal quality that suited the songs well.

From where I stood in the crowd, I heard more than one person make an Enya comparison, but this was not the Enya of the Pure Moods Compilation CD that was constantly advertised on TV in the 90s. As one particularly popular YouTube commenter has pointed out, "this is what would happen if Enya did hardcore psychotropic drugs." The beats are fiercely fresh and the energy ecstatic.

What's great about Grimes is the ease with which she embodies contradictions. She's at once childlike and sweetly upbeat and a total bad ass in her trashy 80s chic. She's the Lana Del Rey who could. The first time you hear her sing, you want to recoil at the sound of her piercing puppet-like voice, but you can't stop listening. Oh, and the girl can dance.

Despite her ailment, Boucher tore through her set, stopping only to petition the sound guy to crank it up every song or two. Her quick movements sent her long hair flying as she cued, sampled, and manipulated the mass of equipment on the large folding table before her. Toward the middle of her set, the guys from Born Gold came out to join her, but their presence seemed to make little difference. The stage was hers.

At a time when "hazy" and "chill" seem to be ubiquitous descriptors of both the mood and music of the indie scene, Grimes comes along with a song like "Oblivion" that pumps you up and makes you feel good.

That review and the 7-song setlist below (it probably would have been longer if she was feeling better) are from the late show. The pictures here by Toby are from the early show, and Toby said, "Grimes played a 50 minute set after announcing that she had emerged from her dressing room after vomiting and feeling sick and would be unlikely to hit any high notes. Though she didn't seem to have too much trouble hitting when covering Oblivion from recent album Visions to the packed house's delight. "

Grimes, who also has an art show in town this weekend, does it again tonight at a sold out Glasslands. She then DJs, and luckily doesn't have to sing, at the afterparty.

More pictures and the late show setlist from Mercury Lounge, below... 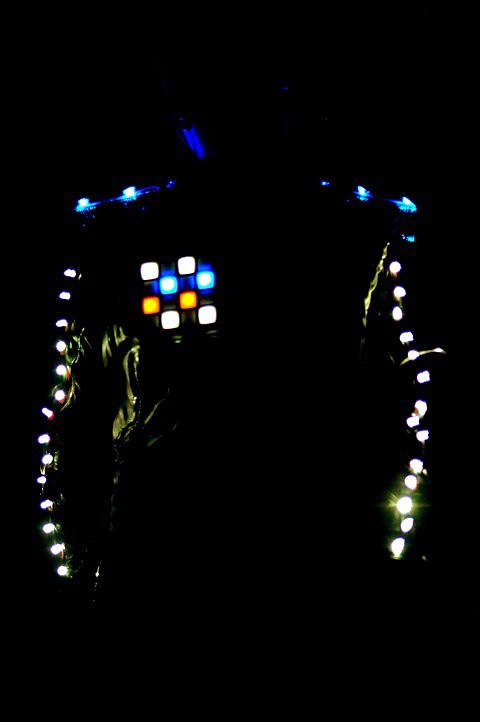 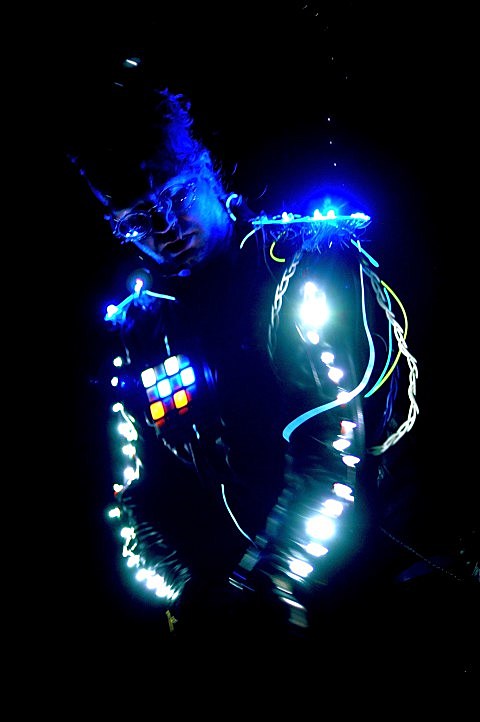 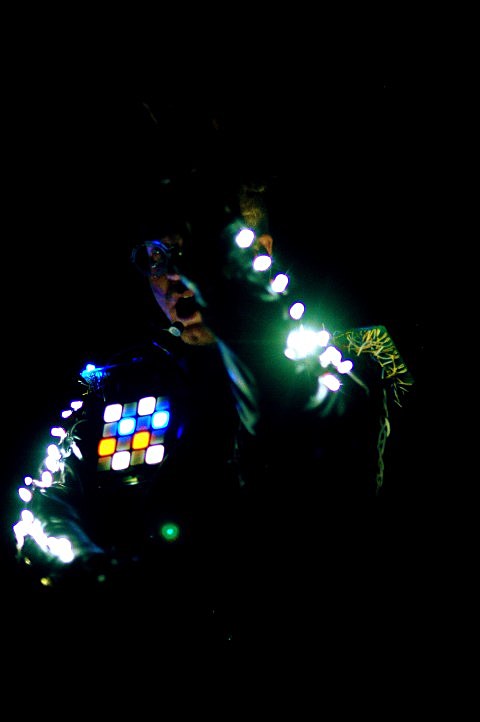 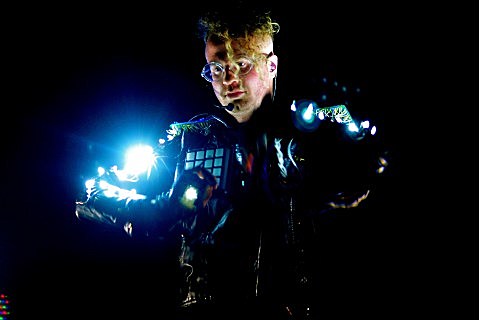 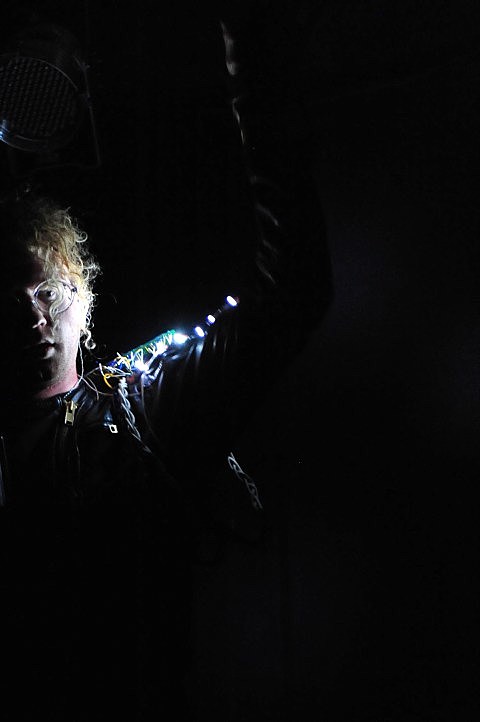 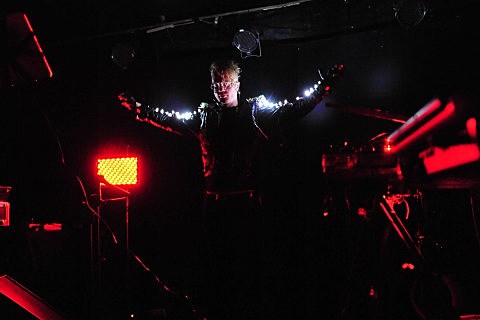 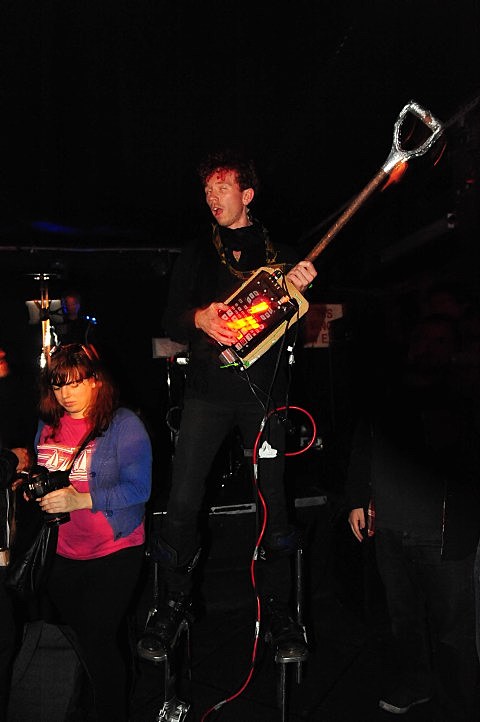 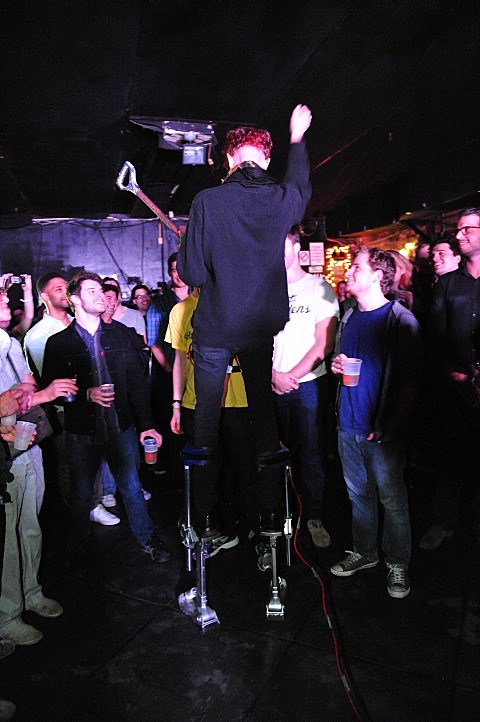 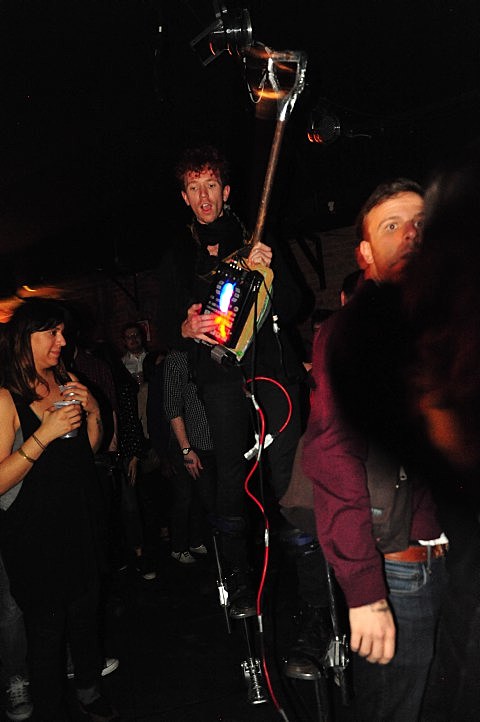 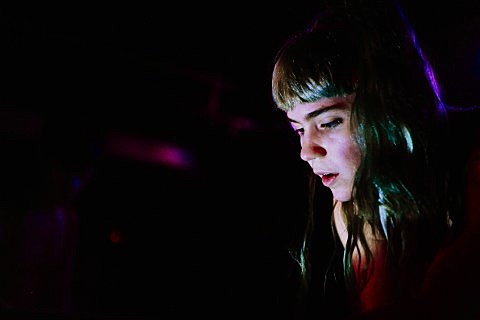 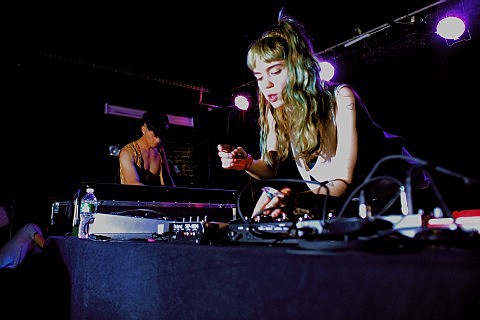 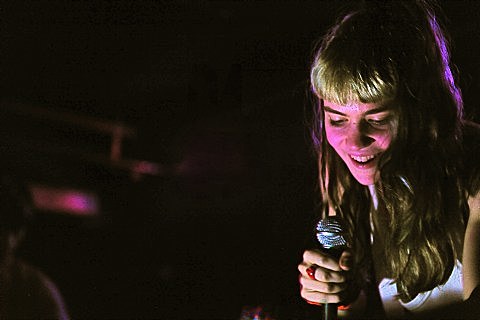 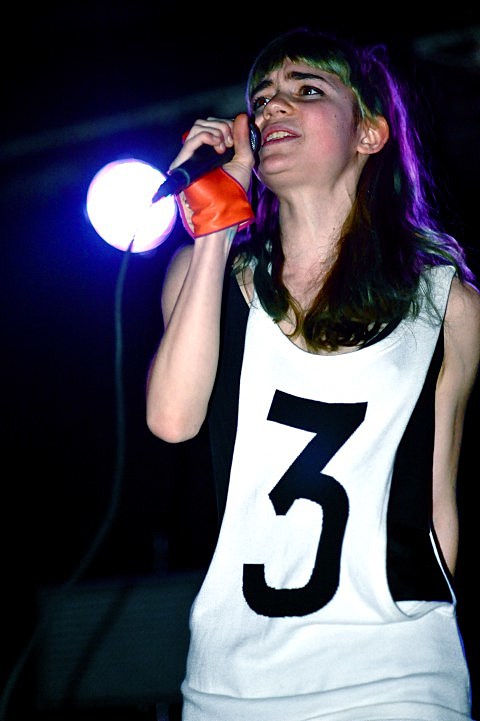 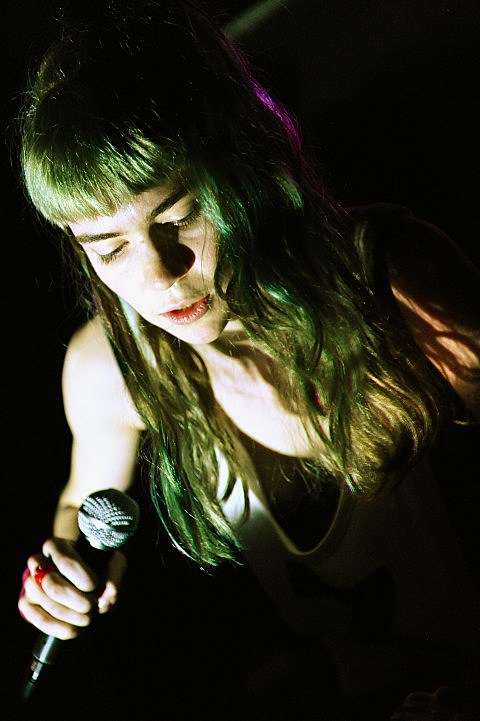 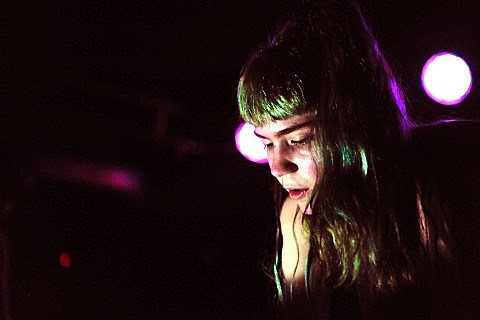 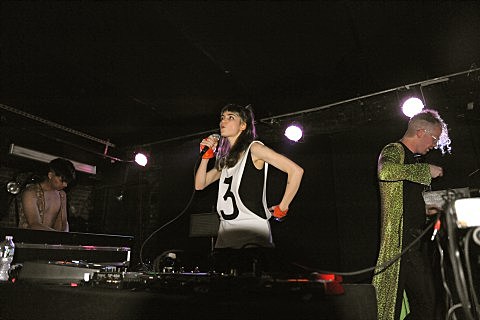 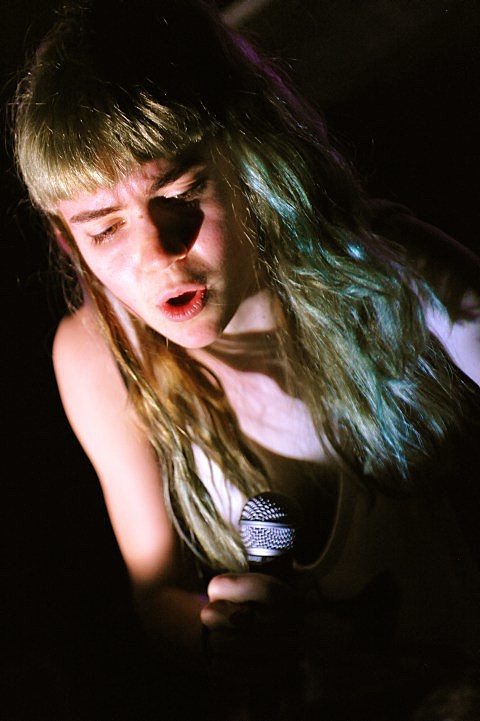 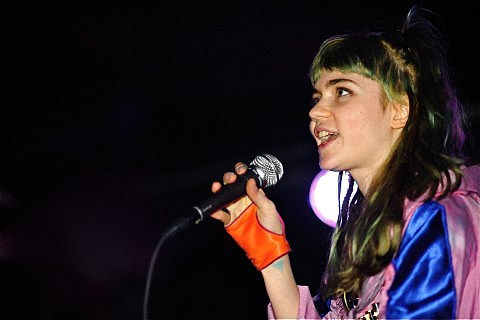 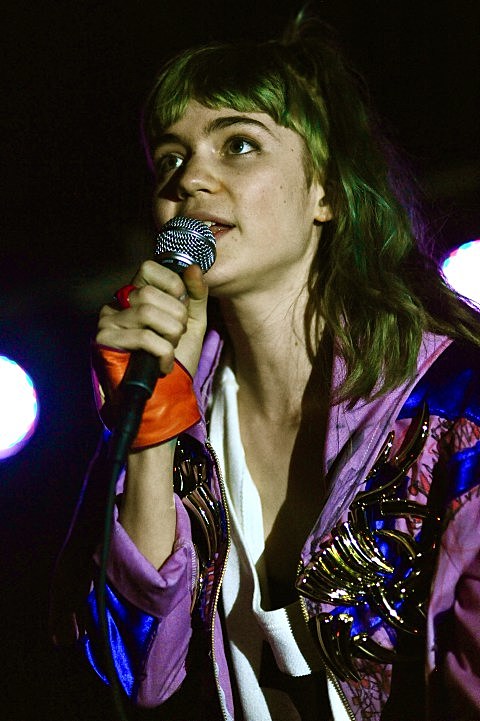 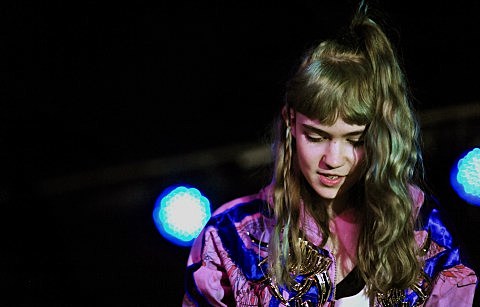 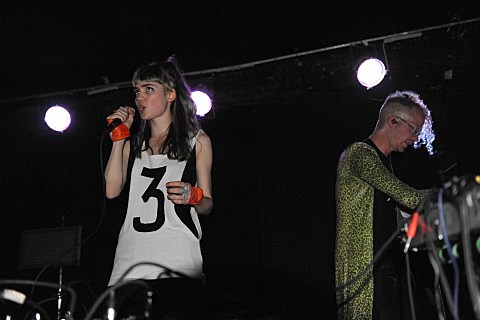