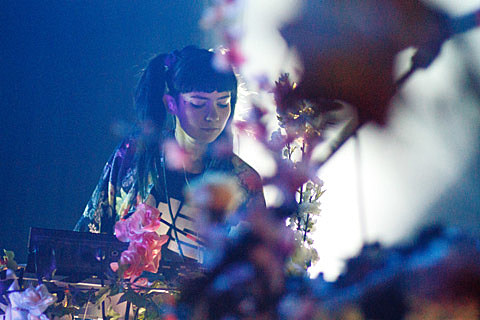 There is no doubt Grimes has had an amazing, perhaps overwhelming, year, selling out four 600-capacity nights in NYC recently to her album Visions ending up on many Best Albums of 2012 lists (like Rough Trade Shops, NME and Fred Armisen's). But what did Claire Boucher pick as her favorite albums of the year? We asked her and you can check out what she told us below.

She cheated a bit though, listing her tour-mates and Arbutus Records label-mate Doldrums' Lesser Evil as her #1, which doesn't actually come out till February 23, 2013, but if it's a list of what she heard in 2012 then we'll let it slide. You can download a track from that Doldrums album above or stream it below along with its music video.

Check out Grimes Top 10 (plus one more, actually) of 2012, which includes both Justin Bieber and Taylor Swift and possibly some inside jokes (we're just printing what she gave us), and that Doldrums song, below.

Doldrums - She is the Wave