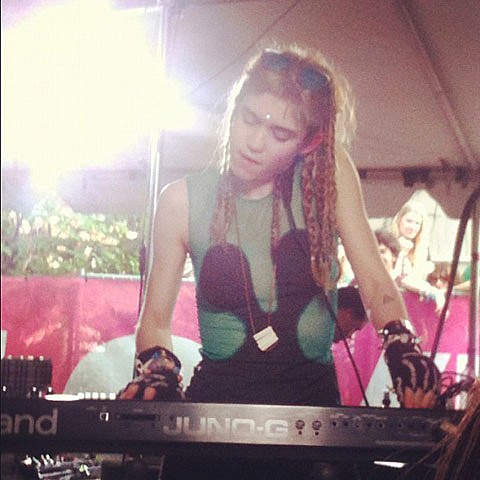 Grimes is all the rage , and I swear it happened almost overnight. If use Austin as a judge, I can tell you that she definitely had a good crowd on one of the smaller stages at Fun Fun Fun Fest in November, but the buzz was nowhere near what was going on just a few months later in the same town for SXSW (which was not long after she played a sold out non-festival show in Austin too). Of course that's because her great new album came out on 4AD over two months after Fun Fun Fun Fest, and less than a month before SXSW, Best New Music included, but still, she jumped high and fast.

Grimes didn't play that many shows at SXSW (adding to her demand) which is a good thing because she was really tired and sick (the kind of sick that makes you cough and stuff), as you can see and hear a little bit in the videos, one of which was filmed at her Urban Outfitters show, below.

Grimes is now in NYC to play three sold out shows with the also-fun Born Gold, two at Mercury Lounge tonight/Friday and one at Glasslands on Saturday. Those shows seem intimate now, though they didn't even sell out that fast. Two of them were announced in November and still had tickets on sale two months later. Now you'll need to give out sexual favors to get in to one of the three if you don't have a ticket.

HOWEVER, you don't need a ticket at all to get into the afterparty happening at Living Bread on Saturday night (3/24). For that you just need to be quick. First come, first served. 150 capacity. Grimes is DJing. Cadence Weapon is too (which is too bad cause he is a great rapper).

If you go to any of these shows, make sure you dance; Grimes likes it when people do, and in turn puts on a better show (or so she says in the video interview below).

Grimes is also in NYC this weekend for her own art show. A press release says:

Grimes, aka Claire Boucher, the Montreal artist whose latest album Visions has made her an international media sensation, will debut a selection of audio and visual art in a special exhibition opening on March 23 at New York City's Audio Visual Arts (AVA) Gallery.

The opening will present a collection of Boucher's paintings and drawings from the past few years - accompanied by works from two other Canadian artists, specially selected by Boucher for the show - highlighting Grimes's multifaceted nature not only as a musician but also as an audio-visual artist and curator of culture.

All upcoming tour dates and SXSW videos below...