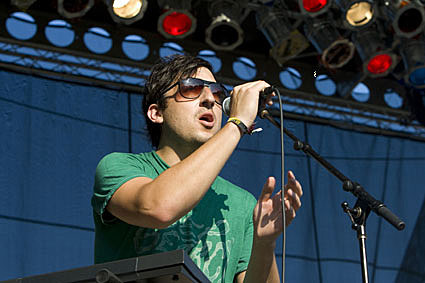 Like they've done before, Grizzly Bear added a show at Music Hall of Williamsburg to their previously announced itinerary. The new May 31st Brooklyn date goes on sale Friday at noon (tickets are $26). The other NYC shows are May 28th and 29th at the seated Town Hall in Manhattan. Tickets are still available for both.

The band's new album Veckatimist will be released by Warp Records on May 25th. The first legally available track, "Cheerleader", can be downloaded above. A single for the song "Two Weeks" will be released on May 18th.

Former Grizzly Bear tour-mate, Beach House, are opening for The Walkmen at Webster Hall on April 16th. Beach House's Victoria Legrand makes a guest appearance on Grizzly Bear's Veckatimist - on the song "Two Weeks" actually. At SXSW in March, a festival both bands played, Victoria joined GB on stage to help perform it. Check out the video below...