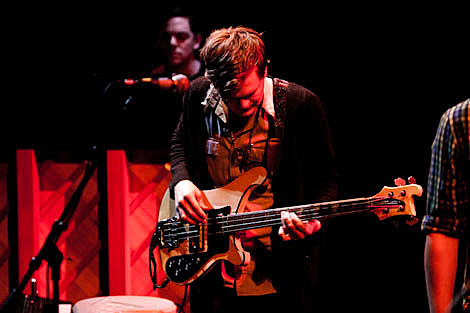 "Produced by the band's own Chris Taylor, Veckatimest - named for a Massachusetts island the band visited during recording - is a stunning collection of twelve songs, featuring guest turns by composer Nico Muhly (whose string parts grace four of the tracks) and Beach House's Victoria LeGrand. It's an album of homespun elegance, bubbling with orchestral flourishes, haunted harmony vocals by all four band members, and a graceful, unrestrained beauty. Splitting their time between recordings in Cape Cod and a church hall in their native Brooklyn, Grizzly Bear's attention to details in the studio is felt on every track. The songs and arrangements are more complex than any of their previous compositions, a result of the band writing together in solitude for months on end. Despite their many layers, there remains a sparse, singular quality to these tracks that ultimately makes them so affecting - in between their fine lines are slow-burning emotions and dynamic melodies. Veckatimest is ultimately confident and delicate, sophisticated and alive; a line no one walks with quite as much panache as Grizzly Bear."

That little statement came in the official press release that also announced Grizzly Bear's entire May & June tour, Sasquatch, Bonnaroo, and the two shows at Town Hall included. All dates below...