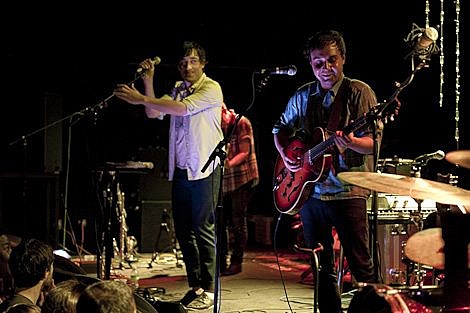 Two major additions to the growing list of free Pool Party shows happening at the Williamsburg Waterfront this summer. HEALTH are playing on July 26th, and Grizzly Bear have officially confirmed that their date is August 30th (thx Jeff).

In related news, Grizzly Bear's Horn of Plenty album is now available on vinyl. Catch the band now on tour.

At the Toronto stop of the tour, Feist joined the band on stage and performed what they probably would have performed last month at Radio City. Watch it below...

Performing "Service Bell" off of the Dark was the Night compilation album and "Two Weeks" off of Grizzly Bear's new album Veckatimest in Toronto on June 5, 2009.