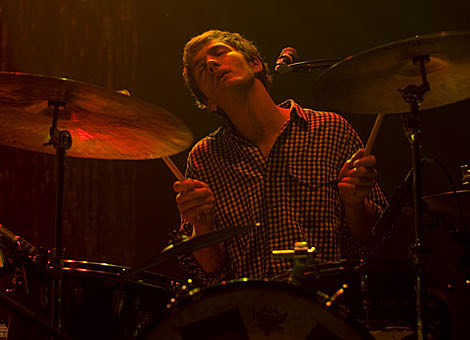 Grizzly Bear & Final Fantasy will be performing with the Brooklyn Philharmonic, conducted by Michael Christie, at the Brooklyn Academy of Music in the BAM Howard Gilman Opera House on Saturday, February 28, 2009 at 8 PM. Tickets go on sale October 20th.

Nico Muhly will be writing the arrangements for GB. FF writes his own. Grizzly Bear's last NYC show was at Hammerstein Ballroom with The National. Their next one will be a few songs at an event for Obama.

"Last spring, Final Fantasy and members of Beirut went outdoors with instruments, microphones, and Alan Lomax's headphones for an ethnomusicological exercise in fake field recordings that captures the culture of the fictional land of Spectrum.' Final Fantasy's Spectrum, 14th Century is out now from from Blocks Recording Club. Final Fantasy's next EP, Plays To Please, is out October 21st, "as part of the Pregnancy Series, presented jointly by Slender Means Society, States Rights Records and Blocks Recording Club. It is six songs written by Toronto genius Alex Lukashevsky, delivered by a 35-piece big band, including Nick Fraser (Drumheller), Paul Mathew (The Hidden Cameras) and Andrew Bird."