Grizzly Bear at Terminal 5 in 2012 (more by Amanda Hatfield) 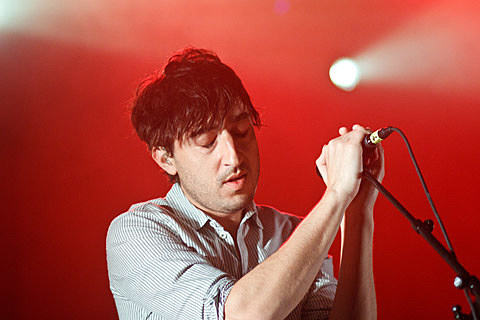 Grizzly Bear are still producing singles off of 2012's great Shields, and they've just made a video for "gun-shy," which was directed by Kris Moyes. Like their video for "Two Weeks," it shows their love of trippy, creepy body manipulation, but instead of warping their faces, this time they're picking their bodies apart with medical tools. Sick. Watch it go down below.

Like Deerhunter and TV on the Radio are doing in May, Grizzly Bear and Yeah Yeah Yeahs (who also like creepy imagery) are each curating and headlining ATPs in the UK. YYYs do it on May 4 and Grizzly Bear on May 5, less than a week before the TVOTR one. YYYs' lineup so far includes The Jon Spencer Blues Explosion, Black Lips, Anika, The Field, Dirty Beaches, King Khan and the Shrines, and Mick Harvey; and Grizzly Bear's includes Van Dyke Parks, the Walkmen, Tortoise, Real Estate, I Break Horses, and Cass McCombs. Tickets go on sale Thursday (1/31) at 9 AM.

ATP is part of Grizzly Bear's spring tour, which also includes other festivals like Primavera Sound, Coachella, and NYC's Governors Ball. A list of all GB dates and their new video below...