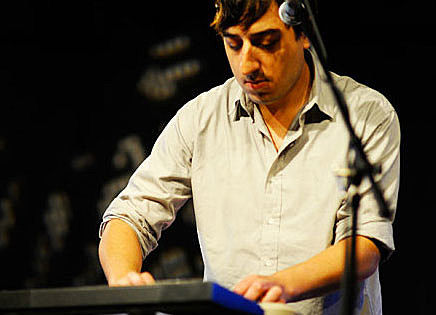 When they weren't busy talking to the NY Times, Fader, New York Magazine, The New Yorker, or one of the many other publications who wrote about them this month, Grizzly Bear stopped by the AOL studios for a session with the Interface. MP3 and picture from that above.

The band also visited WNYC the other day. The results of that session can be streamed at WNYC's site (or downloaded here).

Their new album Veckatimest was released Tuesday, and last night (5/28) was the first of two shows for the band at Town Hall in NYC. Tonight (5/29) is the second. Here We Go Magic is the opener on the whole tour. Pictures are coming, but in the meantime, last night's setlist is below...

Grizzly Bear @ Town Hall - May 28, 2009 - setlist (via the comments & confirmed)
Southern Point
Cheerleader (w/ Brooklyn Youth Choir)
Fine For Now (w/ BYC)
Service Bell
Knife
Little Brother
Two Weeks
Colorado
Ready, Able
I Live With You (w/ BYC)
Foreground (w/ BYC)
While You Wait for the Others
--
He Hit Me
On a Spit, On a Neck