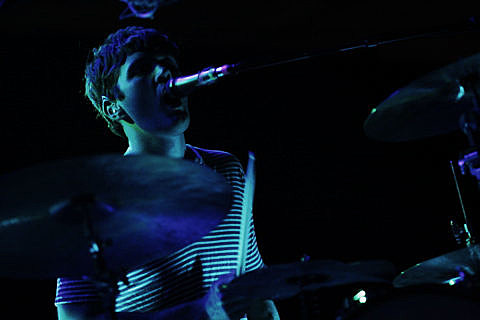 Luke Benge: Has it been a wild ride? Since Veckatimest came out things been going pretty ape shit right?

Chris Taylor: Ha. It's been such a positive feeling apeshit, there have been constantly surprises coming about but I feel really lucky and I'm really excited so I can't really say that I'm feeling weathered by it. I've been recording a lot. So that's kind of been my life when I'm not on tour. Straight back to the studio every time I get off tour, it's literally like I was in the studio the entire time I was off from this last tour to this one. I'm producing Jamie Lidell's record now.

It was kind of weird to hear that Grizzly Bear was opening for Band of Horses (at Williamsburg Waterfront on June 20th), and I guess it's also kind of weird that the Walkmen are opening for Grizzly Bear at Governors Island on August 12th. Gang Gang Dance are also on the bill. $38 tickets (which is itemized as $33 + $5 for the round trip ferry ticket) go on sale Friday at noon.

The show is one of many happening at Governors Island this summer, some that cost money, and some that are free. Many more also still TBA. All GB dates, and a video of Chiddy Bang freestyling over "Two Weeks" and other songs, below...

Chiddy Bang - Translation Freestyle from Kibber Films/Jackpot in the West on Vimeo.