Grizzly Bear at Governors Island in 2010 (more by Dominick Mastrangelo) 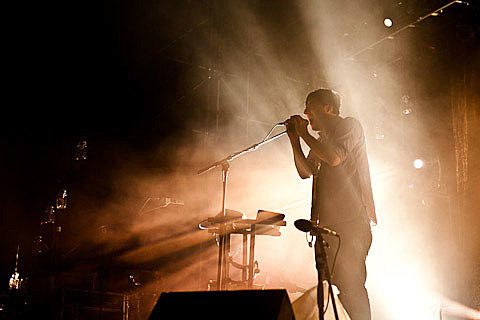 As mentioned, Grizzly Bear are set to release their new album, Shields, on September 18 via Warp. You've already heard the singles "Sleeping Ute" and "Yet Again" and if you haven't downloaded one of the leaks of the album (We won't pretend they aren't out there, the band have even been acknowledging it on twitter) (though they kindly ask that if you like it, you pre-order it) you can now stream the entire thing (legally) at NPR.

Shields is Grizzly Bear's best album yet, and easily one of the strongest releases of this year. Grizzly Bear naysayers who complain that their often sleepy albums don't live up to the pop heights of singles like "Two Weeks" and "The Knife," complain no more. On Shields, every track is as largely arranged, dynamic, and grandiose as its singles -- but this is by no means a "sellout" album either. They drift through passages of progressive folk with baroque arrangements and even touches of jazz sensibilities sprinkled throughout the record. It's as heady and complex as anything they've done, just simply even more appealing and infinitely playable.

As mentioned, Grizzly Bear will support the new album with a tour that comes to NYC for the band's largest headlining hometown show yet on September 24 at Radio City Music Hall with Unknown Mortal Orchestra. Tickets for that show are still available.

Speaking of largely anticipated albums that you can stream on NPR, The xx's new album, Coexist, is out this week and still available to stream. As are the new albums by David Byrne & St. Vincent, Dinosaur Jr., and Aimee Mann.