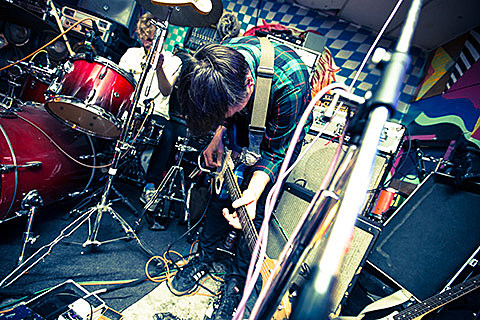 Grooms' last live show, the final night of Death by Audio, was a little hard to get into. Their next NYC show should not prove as difficult. They're playing Brooklyn Night Bazaar on Saturday (12/12) with The Teen Age, Glazzies and headliners Celestial Shore. That's a free show where you can maybe get some holiday shopping done (or a round of mini-golf) and you can RSVP to get on the skip-the-line list.

Grooms' next show after this weekend is opening for A Place to Bury Strangers (who also played DbA's final night) at Music Hall of Williamsburg on February 17 (tickets).That serves as a record release show for both APTBS' Transfixiation, and Grooms' Comb the Feelings Through Your Hair which are both out that day. (You can hear "Doctor M" below.) Look for a tour after that, details are still TBA at the moment.

Main man Travis Johnson took time out from practicing for tomorrow's show to give us his Top 10 LPs of 2014, plus a few runners-up, with a little commentary for each. You can read that below...

Travis Johnson from Grooms' Top 10 LPs of 2014
Aphex Twin / Syro - Just as musically good, though not as completely exciting, as his most vital stuff. But I'll take that over no AT any day.

Protomartyr / Under Color of Official Right - "Scum, Rise" was the first song I heard from them, and it's still my favorite because it helps me to imagine things I like to imagine, but the whole record is great. I don't listen to much rock music being made today, but I love these dudes. Greg Ahee is an inventive fella. Dope lyrics.

Deerhoof / La Isla Bonita - Some of their best stuff in a long time. "Oh Bummer" is my favorite song of the year. Gives me wonderful chills and makes me even more afraid of money than I was before.

FKA Twigs / LP1 - So much that's interesting going on on this monumental debut it's difficult to really talk about for me. One second I'm noticing this great texture, the next second I'm noticing some crazy good melody. This will be a classic for a long time I think.

Ben Frost / Aurora - Composed electronic music with all the ferocity and expressiveness of improvised noise music. I keep thinking I'm emotionally exhausted from it and then it hits with something that drains me even more. That's what I want most from music really.

Mica Levi / Under the Skin - I heard a lot about this when it first came out, and now I'm not hearing nearly enough about it. It's a killer, vital collection.

Ariel Pink / Pom Pom - For better or worse, being an (apparently) nasty person doesn't make your art any less fascinating. There are literally entire slivers of the emotional spectrum that only Ariel can really touch.

Olga Bell / Krai - What a strange, interesting thing this record is! I like records I immediately cannot understand.

Swans / To Be Kind - I kinda miss the 80s Swans. They're about different stuff now... but I also kinda don't miss 80s swans, because the stuff they're about now is so good too.

Imperial Topaz / Full of Grace - Full disclosure: Caroline is my girlfriend, but I would love this record even if we'd never met, or even if we'd only met once and it was the time she purposefully sneezed on my face.

Grouper / Ruins - My least favorite new Grouper in a while, but that's not necessarily saying much at all.

Hooray for Earth / Racy - We got to tour with them on this record and by the end of the tour I was completely stupid for these songs, especially "Airs". That was the grower-est for me. Chills from this one too!

St. Vincent / s/t - Icier and messier (weird mix) than her other stuff. Everyone wants their guitar playing/sound to be unlike anyone else's and Annie's actually is.