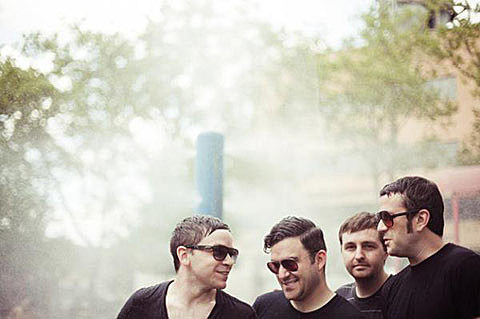 In addition to being Black History Month, National Bird Feeding Month and National Sweet Potato Month, February also seems to consistently have a lot of band residencies. You may already be aware of ones by ARMS (who I'll get to shortly) and Yellow Ostrich,  but I'd also like to point out that up-and-coming Brooklyn indie rock band Gross Relations starts a three-week Tuesday residency tonight (2/8) at Bruar Falls.

Gross Relations have been going less than a year, but seem to have a clear idea with what they want to sound like. Like Mr. Dream and Diehard, the band shares a love of '90s indie rock. With the prominent keyboard lead lines (or maybe it's heavily-treated guitar?) on both sides of their "Fuzzy Timelines" 7", it's pretty easy to make comparisons to The Rentals, but the band they really remind me of is Chicago's late, great Number One Cup.

Either way, it's a good thing. Gross Relations write some majorly catchy songs. You can download the b-side to their single at the top of this post. Tonight's residency also features The Toothaches (whose debut album is a free download), Gone Bad, and NT. 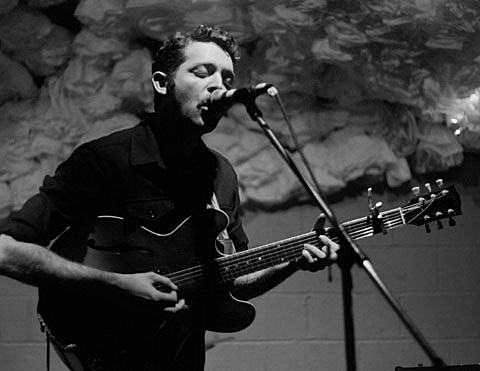 I mentioned ARMS briefly above who are on Week Two (2/9) of their February Wednesdays residency at Pianos. Todd Goldstein and the rest of the band are finishing up work on their debut album (Kids Aflame was more of a Todd solo thing) with Shane Stoneback (Vampire Weekend, Sleigh Bells). So expect a lot of new songs, I'd imagine. Todd says of the record, "It's a vast, hi-fi album. We're doing everything we can to take full advantage of the studio... the songs are very poppy and a little weird, there are lots of beautiful/scary textures, copious-but-thoughtful use of reverb... sequenced into a song-cycle, a sort of sci-fi breakup album." ARMS are hoping to have it out by the summer.

This week's residency is especially strong I think. It includes the lovely Hospitality, who finally seem to be getting down to business, having wrapped up their long-gestating debut album (also with Stoneback) which could be out as early as the spring. Let's hope! Singer Amber Papini promises a couple new songs at the show.

Also playing: Radical Dads, whose new single is a free  for you (with email address) via the increasingly popular Download Widget (found below). And Translations (who share a member with ARMS) open who I am super psyched to finally be seeing live after months of digging their debut 7".

Show's eight bucks, will be a good one. 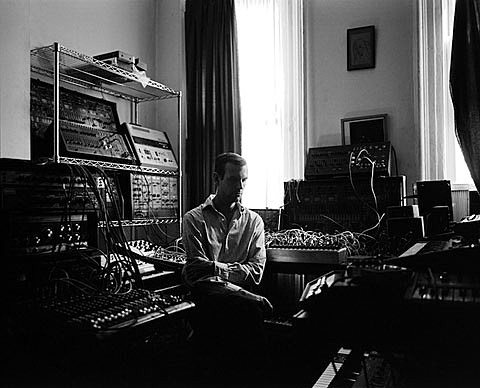 Also Wednesday is the record release party for Martial Canterel's You Today which came out today on Wierd Records. The show is part of Wierd's weekly Wednesday night party at Home Sweet Home. The flyer says performance at midnight, but I've never seen a band go on there before 1AM.

Martial Canterel is the non de synth of Sean McBride who is also one half of Xeno & Oaklander. McBride is kind of a luddite, making his records entirely on vintage equipment that was probably cutting-edge technology in 1980. Obviously it sounds very retro, but McBride's way of doing things also gives it a sound -- and authenticity -- you can't quite replicate on a laptop. Check out the title track at the top of this post. And if you dig that, also up there is a free downloadable Martial Canterel retrospective, including some rare songs. 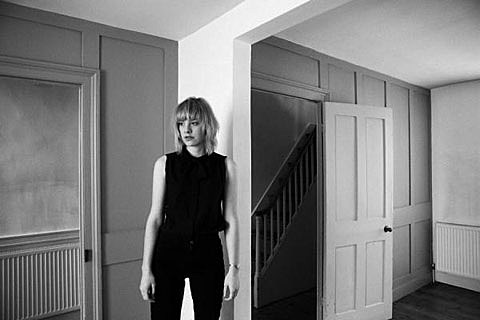 In town this weekend is Anika whose debut album was a late-breaking entry into my Favorite Albums of 2011. Recorded in 12 days, live with no overdubs, it sounds like the missing link between The Slits and Lilliput. Portishead's Geoff Barrow -- his other band BEAK> is the backing band here -- gets the claustrophobic vibe just right. A lot of people have tried and failed to recreate that Martin Hannett Sound... Barrow nails it. And the material -- a mix of girl group covers and politically-charged originals -- suits Anika's Nico-esque delivery perfectly.

You can download two tracks from the album at the top of this post. "Yang Yang" is a Yoko Ono cover, and "Terry" was originally recorded by Twinkle, who is probably best-known for having made the original version of "Golden Lights" that was later covered by The Smiths. (Many Smiths fans' least favorite track, but not mine. That would be "Never Had No One Ever.") The album sort of snuck out at the end of 2011, so catch up now. So good.

Don't get too excited though, Anika is just over for some DJ gigs -- I'm hearing we'll get her performing in May (and probably later at ATP) -- but I'd recommend checking one of them out nonetheless. Especially as three of them are free: on Thursday (2/10) she'll be at Gallery Bar with Blu Jemz, then  Saturday (2/12) at Trophy Bar and a Valentine's Day set  (2/14) at The Commodore. The remaining three NY DJ appearances are atMercury Lounge tomorrow night (2/9) spinning between sets at the Cubic Zirconia show (tickets), and Glasslands on Friday (2/11) where she'll spin in between sets by Javelin, High Life, & Monster Rally (tickets), and finally Santos Pary House on 2/16 as part of the previously discussed Beans show with Edan, Paten Locke & Bluebird (tickets).

That Javelin show on Friday night should be fun, as Anika's tastes will nicely contrast/compliment the sounds of Javelin (always one of the better live bands saddled with the "chillwave" tag), Highlife and Monster Rally.

That's the big stuff this week. Some more picks, day-by-day, are below.

Gang of Four at Webster Hall, though really it's more like Gang of Two as it's just Jon King and Andy Gill from the original line-up these days. Their new album, Content, isn't bad. But most people will go to hear "To Hell With Poverty," "At Home He's  a Tourist," and other classics. And while Hugo and Dave will be missed, Andy Gill is still amazing to watch spit out those riffs, and Jon King remains possessed on stage -- especially when he's beating the shit out of a microwave on "He'd Send in the Army." 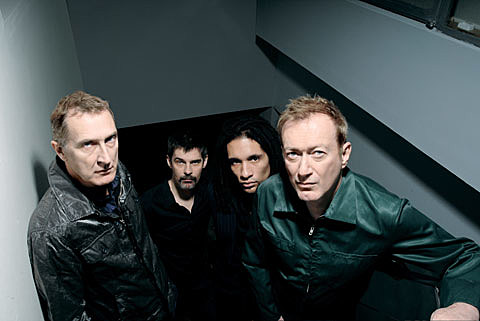 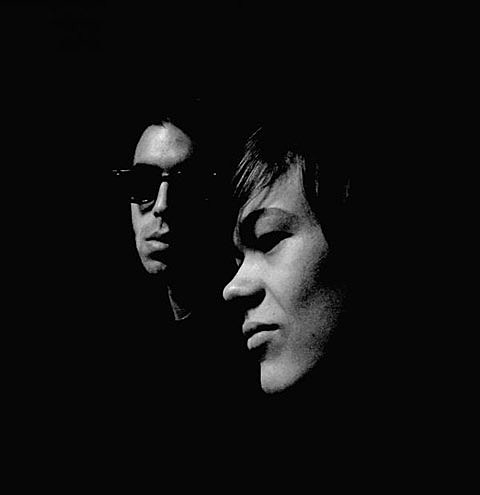 Burlington, Vermont's Vacant Lots at Silent Barn. You can download the a-side to their new single on Mexican Summer at the top of this post which is recommended to all fans of VU/Spacemen 3 style pysch-drone. The show is with Web Dating (Tucker from Total Slacker's poppier, less-druggy band), Soft Black, and Minneapolis/Brooklyn band Howth.

It's Social Media Week here in New York, and I'm going to be on a panel discussion called Guided by Voices...The Changing Face of Music Discovery which will hopefully be fun and interesting. Other people yakking besides me: Doug Brod of SPIN, Elliot Aronow of RCRD LBL, and Tim Heineke of Shuffler.fm.

Variety show Supershow! returns to Coco66 tonight, and amongst the highlights will be a look into the suprisingly weird, complicated and fascinating story behind the Baha Men's unavoidable 2000 hit "Who Let the Dogs Out." Free. 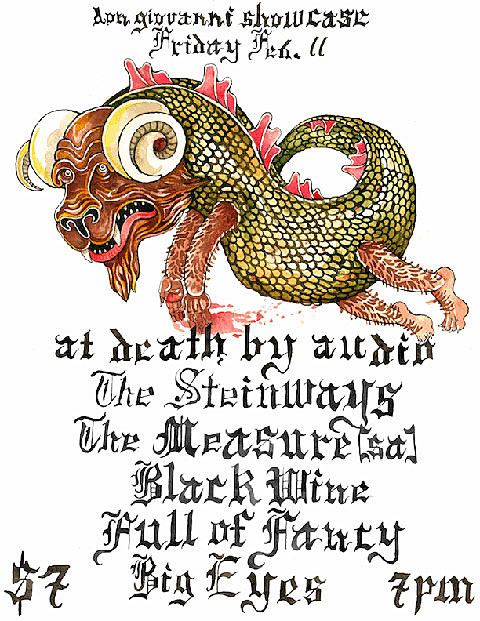 The fine Don Giovanni label hosts two shows this weekend in Williamsburg. Tonight, it's at at Death by Audio tonight, featuring The Steinways, The Measure, Black Wine , Full of Fancy and Big Eyes. Don Giovanni just released a new downloadable sampler that's pretty great -- the link's up there with the rest of this week's downloads.

Calvin Johnson plays with Chain & the Gang (with Ian Svenonius), Girls in Trouble, and E-Prhyme at the tiny apartment/venue Dead Herring in Williamsburg. 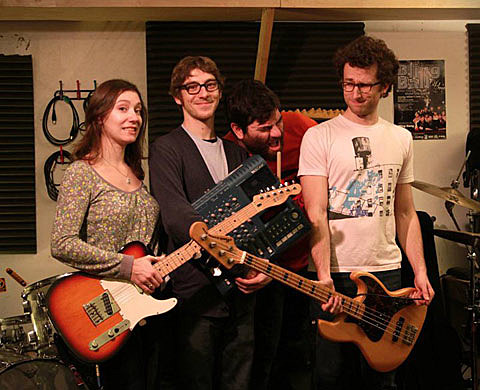 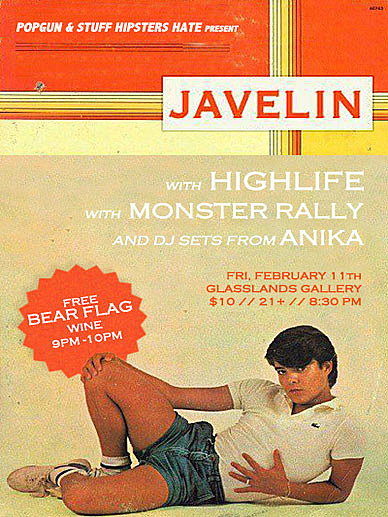 If you haven't seen former Ponytail guitarist Dustin Wong do his solo instrumental thing yet, you can remedy that tonight by heading to Death by Audio. I was never a fan of his previous outfit, but his ability to build gorgeous songs out of a guitar and a bevy of effects pedals is mesmerizing. Also playing: Math the Band, Thank You and Ed Schrader.

Baths and Braids hit Knitting Factory (Mercury Lounge on 2/16 too). This tour was supposed to include hyped UK DJ/producer Starslinger, but he had to pull out at the last moment (visa issues, etc). FYI. Braids are Baths are certainly more than enough reason to go.

Chill out to the transcendental sounds of Prince Rama + Lichens (Robert Lowe, ex-90 Day Men) who play the 'Sup party at LIBERTY HALL which is in the Ace Hotel (20 W. 29th St). Free with RSVP. 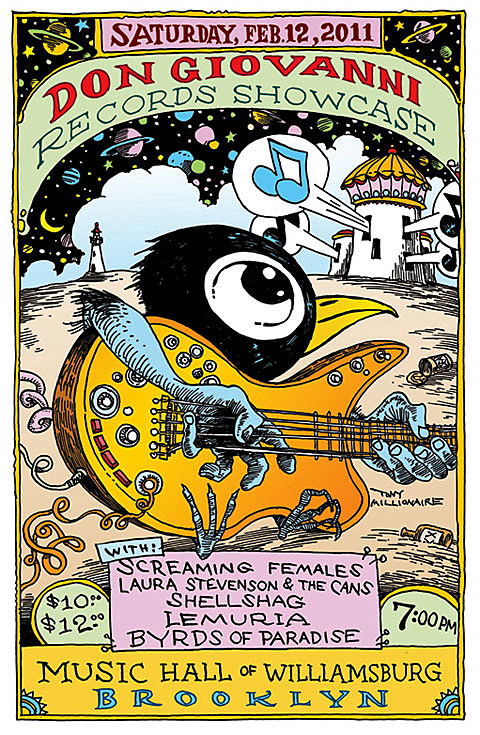 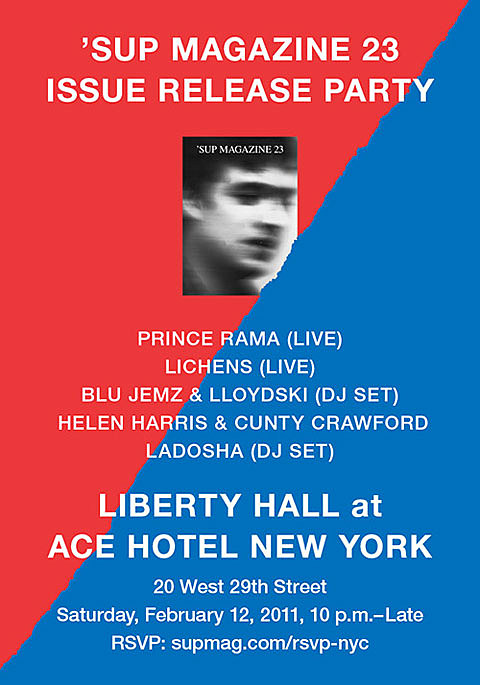 It's a very strong bill at Bowery Ballroomwith Wild Nothing, Abe Vigoda and Minks.

If you missed Abe Vigoda at Bowery, spend Valentine's Day with them at Le Poisson Rouge. Illustrator Marcellus Hall and comedian Ted Alexandro are also on the "Radio Happy Hour" bill.

That's it for this week. Flyers and videos after the jump. 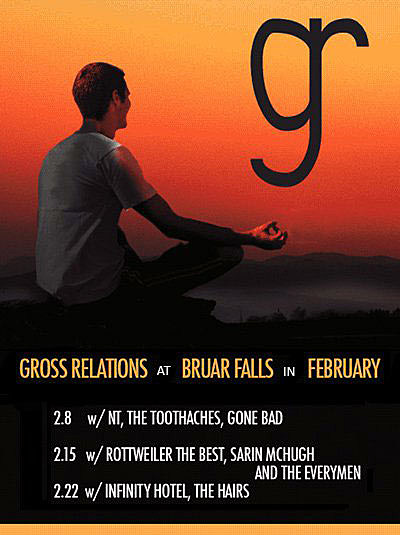 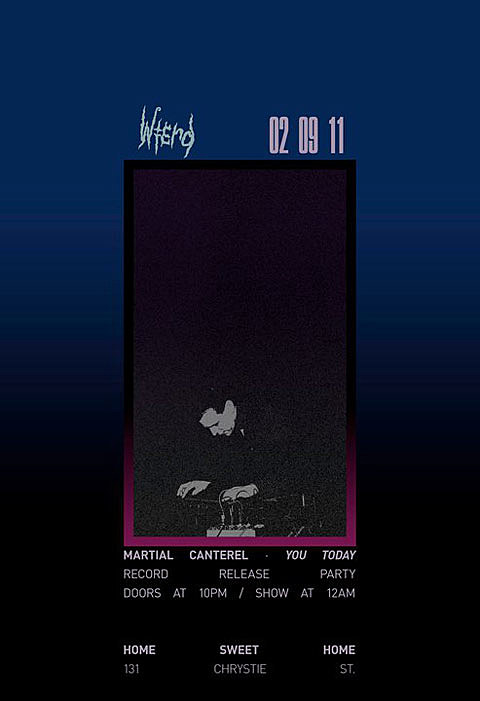 Gang of Four - You'll Never Pay for the Farm 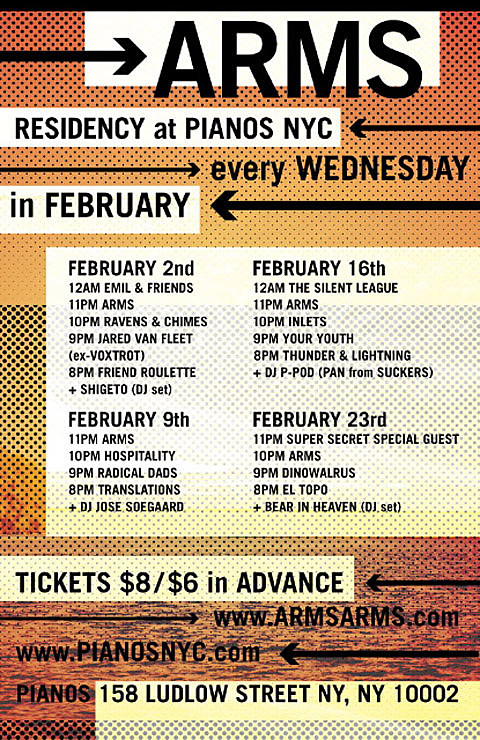