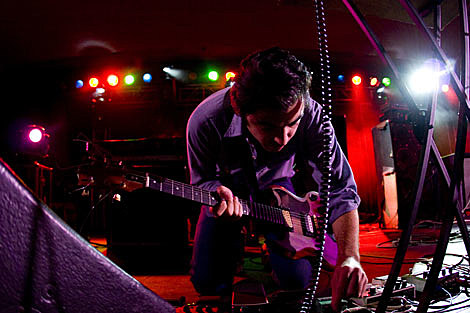 Growing and their bleeps, blorps, and bloops will team up with the killer guitar loop-stravaganza of The Psychic Paramount for a show at Death By Audio on June 26th, one of a pair of NYC shows for Growing. The gigs will serve as a warm-up for the band that recently became a trio (Sadie Laska of IUD is now a member of Growing) before they head out to jolly ol' England in the tail end of July.

The second NYC date for Growing is on July 10th, where the band will join Javelin, Devin Flynn & Gary Panter, Kokomo and headliner What Cheer? Brigade at Market Hotel.

The What Cheer? Brigade is a rowdy 19-piece brass band from Providence, RI. We play Luddite Hardcore, loud, mobile music requiring no electricity. We are a party band, and our sound incorporates elements of the following musical traditions: Bollywood, Balkan, New Orleans, Samba, and punk...

In short, WCB is a band in the high school drum major sense, similar to their west coast counterparts Extra Action Marching Band, playing loud originals as well as covers such as Salt n Pepa's "Push It" and The "$25K Pyramid Theme" in the video below. The band also has a few MP3s for stream and download. Their Brooklyn show is one day before they play the 2009 Whartscape Festival in Baltimore.

IUD will team up with Bloody Panda (who have Summon on the way) and the incomparable Jarboe for a show at Santos Party House on June 27th, the same night as the Growing DBA gig.

What Cheer? Brigade performing "$25K Pyramid Theme" and "Push It"