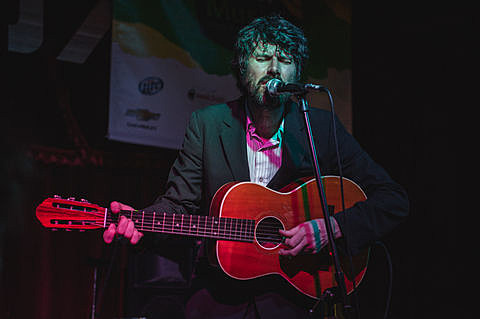 Super Furry Animals frontman Gruff Rhys will release his new solo album, American Interior, in North America on November 4 and will be touring in support of it, including an NYC show at Baby's All Right on November 8 (tickets). He's just added a second NYC show, the next day (11/9) at Rough Trade. It's a noon matinee and is free with purchase of American Interior at Rough Trade between 11/4 and day of show. UPDATE: show is now just free, no purchase necessary.

in other news: as you may know, American Interior is also a film (as well as a book and mobile app), all based around Gruff retracing the steps of his distant relative John Evans as he traveled through North America in the 1790s. The film, co-directed by Dylan Goch, will make its NYC premiere at a free BrooklynVegan-presented screening on November 8 at Videology in Williamsburg. It's at 5 PM SHARP screening (Videology is just a few blocks from Baby's), and Gruff will be there to introduce the film. RSVP here; entrance based on capacity. Please arrive early. Hope to see you there!

In other SFA news, bassist Guto Pryce's other band, GULP, makes their NYC debut tonight (10/23, 6:45 PM) at Drom as part of CMJ. It's their only show this week.

Trailer for American Interior (and stream of the album), plus an updated list tour dates, below...