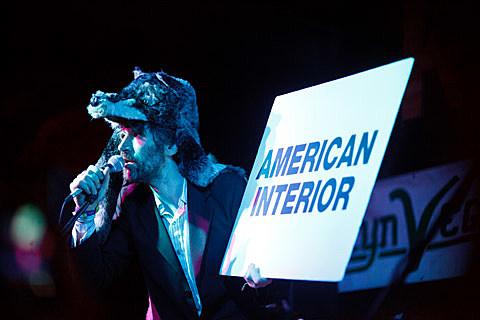 Gruff Rhys' new album/film/book/app, American Interior, came out in the UK this month. The multimedia project retraces the steps of distant Rhys relative John Evans as he traveled through North America in the 1790s. You don't need to know the details to enjoy the album, though, which is full of Gruff's well-crafted, clever, tuneful songs. While he definitely has a style running through all songs, American Interior doesn't really sound quite like anything he's done before, with piano figuring prominently in most songs. It's another great record from one of the most consistently interesting and talented musicians of the last 20 years and you can stream the whole thing -- complete with visuals from the accompanying film -- below.

American Interior won't physically hit the American interior till the fall, when it will be released November 4 via the just-launched stateside branch of Welsh label Turnstile, which has been Gruff's UK home for a while (Cate Le Bon's too). Around that time, Rhys will also be on a North American tour which will incorporate visuals and storytelling into the performance. He's a very entertaining live performer so these should be something special. The tour includes a NYC stop at Baby's All Right on November 8. Tickets for that show go on sale Friday (5/30) at noon.

No word yet on an American release of the American Interior film, but the book is available now, as is the app on IOS and Android.

All tour dates are listed, along with the album stream and trailer for the film, below.