Guards at The Slipper Room in 2012 (more by Amanda Hatfield) 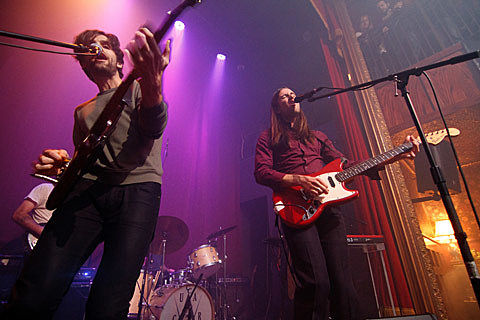 NYC indie pop crew Guards, whose debut LP, In Guards We Trust, is one of the catchiest albums of the year so far, is heading to Indio, CA for Coachella this weekend and they'll kick off a tour after that. The tour sees the band opening for Palma Violets, Best Coast, and Alt-J on separate dates, including both previously discussed Palma Violets NYC shows. Those shows happen on May 9 at Music Hall of Williamsburg and May 10 at Bowery Ballroom, the latter of which is also part of Downtown Music Festival. The Bowery date is sold out but tickets for the MHOW show are still available.

Guards' tour also brings them to other festivals like Primavera Sound, Osheaga, and Lollapalooza. All tour dates are listed, along with their recently made video for album standout "Ready To Go," below...