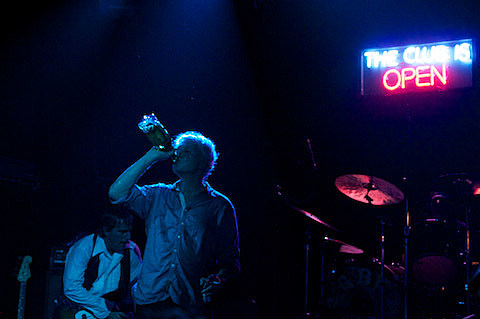 Guided By Voices is returning to NYC and will headline the McCarren Park Stage on Saturday, June 18! Wavves is going to open the Brooklyn Northside Festival show which is going on sale Friday, April 8, at 10am EST. Tickets are $30 in advance. You can also attempt to get in with a Northside Festival badge.

This show is one day after Beirut headlines the same Brooklyn stage, and a month before Guided By Voices play Pitchfork.

Other confirmed Northside bands include Deervana who hit Brooklyn Bowl on June 19th, and Twin Sister who headline a show at Music Hall of Williamsburg.

Created by The L Magazine, The Northside Festival, June 16-19, is a four-day celebration of Brooklyn and what's next in Music, Art, Film and Ideas. The best regional, national and global talent will be showcased, all within the walkable radius of Williamsburg and Greenpoint. Visit www.northsidefestival.com

Northside Music:
Over 250 bands will play over the four days at more than 25 venues scattered throughout the neighborhood, the majority of which will be handpicked by some of the most respected labels, bloggers, record stores and other independent tastemakers in the community. Highlights include the return of live music to McCarren Park, with Beirut and Guided By Voices set to headline. Another exciting addition to this year's lineup is Deer Tick, who will be performing as Nirvana tribute band Deervana at Brooklyn Bowl.

Northside Art:
On June 18 and 19, the most densely populated arts community in the country will open its doors to the public in a massive Open Studios program in conjunction with Greenpoint Open Studios. Hundreds of artists and galleries will show their latest work to thousands of interested patrons.

Northside Ideas:
As Brooklyn has become a national incubator for new ideas and media, the creators and innovators developing exciting new products and brands will speak on a series of panels about what to expect next.