Guided By Voices at McCarren Park (more by Tamara Porras) 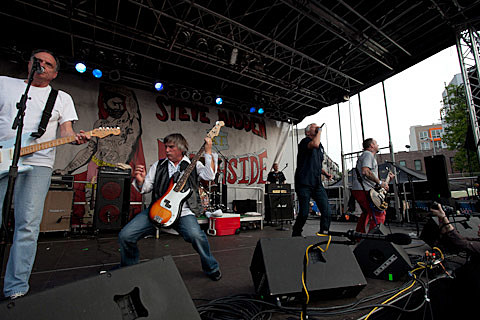 After resurrecting Guided By Voices last year, it seems that Robert Pollard is putting them back to bed, and soon.

According to a statement by Guided by Voices frontman Robert Pollard earlier this week and later confirmed by management, the band's appearance at Hopscotch Music Festival with Drive-By Truckers and The Dodos on Friday, Sept. 9, will be the final appearance of the band's reunited "classic" line-up. [Hopscotch]

I'm not sure anyone thought the reunion would last longer than November 2010 anyway, let alone extend to New Years Eve followed by another nine months of scattered shows. Nonetheless, it seems the September 9th show that is part of the Hopscotch Festival, will be their last (again).

Guided By Voices played their last (ever?) (ever as the classic lineup?) NYC show at McCarren Park as part of the Northside Festival in June. The band plays Pitchfork Festival this weekend. They also hit FYF Fest in LA before this is all over (they also have time to schedule another NYC show before September 9th. Hey, why not?).

All remaining dates, and some recently posted video from Philadelphia is below.