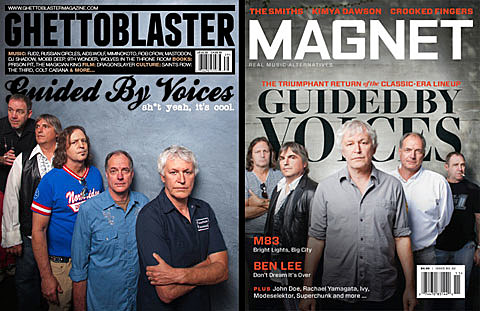 In case there was any doubt as to whether Guided By Voices were still a band:

After a fifteen year hiatus, the "classic line up" of Guided By Voices finished off its year-long reunion tour by recording an album of 21 new songs, making a deliberate effort to return to what bandleader Robert Pollard calls the "semi-collegial" approach of iconic GBV albums like Bee Thousand and Alien Lanes. Let's Go Eat The Factory is some kind of return to form: sprawling, variegated, and yet still recognizably and coherently Guided By Voices in both its literal and mythic senses. To celebrate the release of Let's Go Eat The Factory, Guided By Voices will be making a rare appearance on the Late Show With David Letterman on January 3, 2012.

'Let's Go Eat The Factory' is available by mail order from Rockathon on January 1, 2012, and will be in stores nationwide on January 17. The record will be available digitally from iTunes at midnight tonight (12/20). Listen to the album now at NPR.