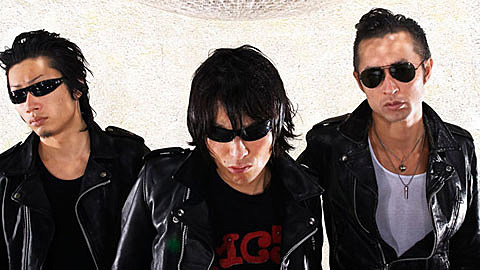 Guitar Wolf is a Japanese garage punk power trio founded in Nagasaki, Nagasaki in 1987. The band is known for songs with piercing vocals and an extremely loud style of noise-influenced punk which emphasizes heavy distortion and feedback. They coined the phrase "jet rock 'n' roll", which they also use to describe their musical style - an energetic cross between the Ramones, rockabilly, 77 punk, and garage rock. -[Wiki]

Break out the leather jackets, Guitar Wolf are back in the USA at Santos on September 23rd. Tickets go on sale Saturday, June 19th, 10am. The band recently dropped Jet Satisfaction, a five song "mini-album", a follow-up to their 2007 LP Mars Twist. The band currently have no other US dates, though I would imagine more will pop up on the radar.

Current dates and some videos below....