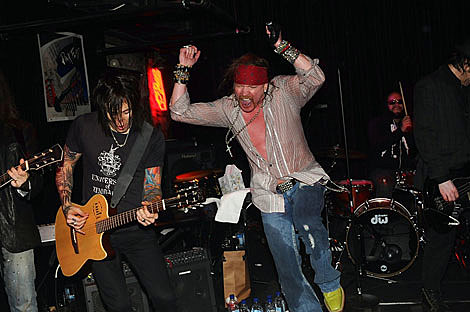 Axl Rose's current version of Guns N' Roses are heading out on a short "up close and personal" tour this February, timed to coincide with fashion week (true story). The currently-six-show run kicks off with three NYC shows and also includes a NJ show. They'll play Roseland Ballroom on February 10, Terminal 5 on February 12, and Webster Hall on February 15, except they'll be calling Webster Hall The Ritz for that show, as that was the name of the venue when they filmed Live at the Ritz there in 1988. The tour also brings them to Atlantic City's House of Blues on February 24. Tickets for the NYC shows go on sale Wednesday (2/1) at noon and tickets for the Atlantic City show goes on sale Friday (2/3). All dates are listed below.