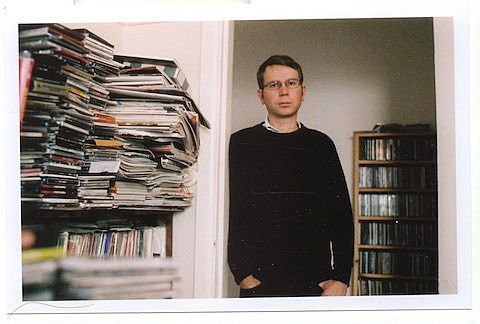 Guy Blackman runs the very cool Australian label Chapter Music which is home to such acts as Dick Diver, Crayon Fields, Twerps, Goon Sax, The Stevens and more. He also makes his own music -- he was in early-'90s twee pop band Sulk -- and maybe you heard his 2008 album Adult Baby that featured appearances from Jens Lekman and members of Total Control/Eddy Current, Dirty Three, Fabulous Diamonds, Crayon Fields and many others. You can stream that below.

Blackman has a new record coming out as part of Canadian label Kingfisher Bluez' "Buddy System" singles club that features a new 7" each month that's currated by a different indie label, including Slumberland, K, Flying Nun, Moshi Moshi and... Chapter Music. Kingfisher Bluez specifically requested two songs by Guy for the Chapter edition, which is the next to be released. One of those songs, an appealingly loungey (and louche) bit of synthpop titled "Camming 4 Each Other," features Crayon Fields' Geoffrey O'Connor on guitar and backing vocals and he mixed and mastered the record as well. That song makes its premiere in this post. You can listen below.

You can still order a subscription to the Buddy System: A Kingfisher Bluez Singles Club.

For those in Australia, Guy Blackman will play Melbourne's MPavilion on December 6. It's his first solo show in three years and is free. More info here.