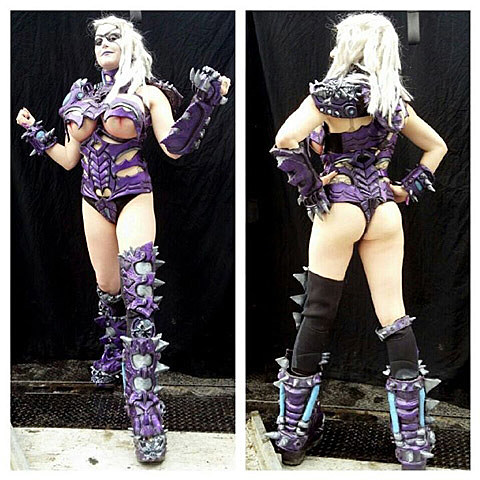 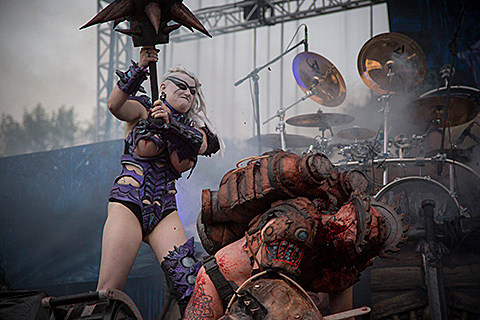 GWAR played Riot Fest Chicago last weekend, with the return of Blothar (aka Mike Bishop, formerly Beefcake the Mighty) as vocalist who is leading the intergalactic band on a tour/quest this fall to, as their ongoing mythology goes, find the lost leader Oderus (the late Dave Brockie). He's actually co-leader of the band now, with new female warrior Vulvatron also on vocals. Vultatron, who made her live debut at Riot Rest, is the first female member of GWAR since Slymenstra Hymen left in 2000. In real life Vulvatron is Kim Dylla who also plays in Kung Fu Dykes (who played GWAR-B-Q 2013) and Thismeansyou, is also a visual artist, and more. Kim Kelly had a bit to say about Vulvatron over at Wondering Sound:

Why is it so important that one of the biggest bands in metal has just added a female member to its ranks to replace one of metal's biggest personalities? How could it not be? It's no secret that metal's demographics still skew heavily towards straight white cis men, but this decade has marked a definite shift; audiences are diversifying. But there is still a lot of work to be done. Representation matters, and now, all of a sudden, there's a big, brash, bold new female personality on stage with a legendary band. Moreover, she's just as gross and goofy as her male bandmates, whether she's slaying dinosaurs or disemboweling Nazi skinheads onstage or drenching her minions with the aforementioned boob-blood (a move which, as a bit of trivia, references Slymenstra's past crotch-spewing exploits).

Vulvatron's costume is skimpy, but so are those of her bandmates; it's not a Gwar show unless everyone's arse is out. She occupies a powerful role. She's nobody's girlfriend, or groupie or background dancer; Vulvatron is in charge. She gets to be a monster instead of a princess, and that is immensely important for younger girls who are just starting to explore heavy metal.

Update: Despite initial reports that Vulvatron is a frontwoman, she is actually one of several vocalists, but not the lead.

While in Chicago for Riot Fest, GWAR stopped by the AV Club to perform a punishing version of The Pet Shop Boys' "West End Girls" for an upcoming episode of AVC's "Undercover" series, so keep an eye out for that. Soon, Vulvatron, Blothar and the rest of GWAR's scorge will hit NYC on their tour this fall.